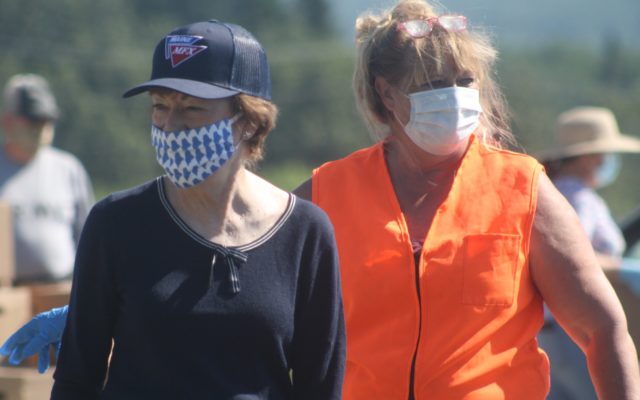 Chris Bouchard • July 30, 2020
When the effects of the coronavirus pandemic shut down much of The County in mid-March, Catholic Charities kept on going, with more and more food requests and the addition of four new pantries to serve, which brings their total to 28 pantries.

CARIBOU, Maine — For more than three weeks, Catholic Charities, through a partnership with the USDA and Pineland Farms, has been distributing food boxes to Mainers throughout Aroostook, Washington and Northern Penobscot counties and will continue to do so throughout August.

“It’s exhausting, incredible and unbelievable all in one package,” said Dixie Shaw, Catholic Charities Hunger and Relief Services director, who called the program one of the most “fast and furious food distributions” she’s ever been involved with.

The USDA Farmers to Families Food Box Program provides 10,000 boxes of food that are distributed across Maine each week. There are no income guidelines and all Maine residents are eligible.

“So many people have said to us that they never qualify for anything,” Shaw said. “There are so many people who are suffering right now and may need things that people don’t realize. They could have a nice house and a fancy car, but that doesn’t matter if you’re out of work and experiencing the challenges we’ve had with the virus. You could have a great business, but it could be shut down.”

The food for the boxes has been purchased through a $2.14 million contract the USDA awarded to the Maine Farmers Exchange in Presque Isle, along with $1.35 million awarded to Native Maine Produce & Specialty Foods. The funds allow for the purchase of produce, dairy and meat products from local farmers to fill the boxes.

When the effects of the coronavirus pandemic shut down much of The County in mid-March, Catholic Charities kept on going, with more and more food requests and the addition of four new pantries to serve, which brings their total to 28 pantries.

“Everything stopped for everybody, and everything immediately got crazy for us. We never stopped, not for a second,” Shaw said.

“It’s been crazy, but all of a sudden we had an opportunity to be a part of this and I didn’t bat an eye when they asked me if I could help. I knew it was needed; and it’s food, and that’s what we do. It’s our mission to feed folks.”

So far there has yet to be any food left over after any distribution events, which have taken place all over Aroostook County.

She said Catholic Charities relies heavily on volunteers to manage the distribution. The Presque Isle’s Elks Lodge and high school hockey team, as well as the St. Louis Church in Fort Kent, have been among the helpers.

“We couldn’t possibly do it without these wonderful people and organizations,” she said. “It takes anywhere from eight to 16 people at each distribution.”

Because the program is statewide, Shaw said if anything is left over after an event in another county, it could go to her organization for distribution. Recently, they received 300 leftover boxes and were able to pass out a total of 1,700 boxes in Presque Isle.

The distribution typically goes from 10 a.m. to 2 p.m., but the boxes are usually gone by 2.

“Some people are a little shy about [November and December] because of the weather conditions, but with Catholic Charities we’ve been passing out food 12 months a year during rain, snow, winds, and floods,” Shaw said. “We’re not scared.”

Looking ahead, Shaw said she needs more volunteers to assist with the distribution. While Presque Isle has plenty of workers, they are currently seeking volunteers in St. Agatha. For liability purposes, Shaw said the organization cannot have any volunteers under the age of 16.

Anyone interested in volunteering or learning more about the food distribution can email Shaw at dshaw@ccmaine.org.

“I just want people to know that this is for anybody and everybody,” Shaw said. “If you have a pulse and you live in Maine, you qualify. We’re happy to be a part of this, and to be able to bring more food to the folks of our area.”

Rep. Joseph Underwood, R-Presque Isle has been appointed to serve on the Legislature’s Agriculture, Conservation and Forestry Committee.
Pets END_OF_DOCUMENT_TOKEN_TO_BE_REPLACED