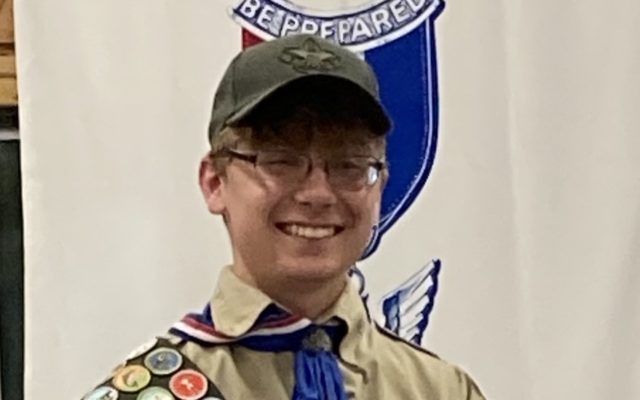 CARIBOU, Maine — Caribou Scout Troop 184 member Devon Ouellette was given the Eagle Scout honor during a socially distanced ceremony at the Caribou Scout lodge on July 10.

Keaton said Ouellette had to start in the summer and build the cover stations up off the ground so they would not be buried in the snow. He received help from friends, family and fellow Scouts and ultimately put more than 140 man hours into the project, the scoutmaster said.

“Everything worked out well, and the ski patrol was really happy with the project,” Keaton said.

When the COVID-19 pandemic hit in mid-March, Scout meetings were either placed on hold or held via Zoom.

Once restrictions were lifted and Maine Gov. Janet Mills permitted gatherings of up to 50 people, Keaton said he began to work with Ouellette’s family to plan a socially distanced Eagle Scout ceremony.

The roughly 20 Scouts in the troop were able to attend, but they could not bring any family members, as only Ouellette’s family could attend in order to meet social distancing guidelines.

In addition, representatives from the Caribou Rotary Club, Aroostook Friends For Scouts, the Caribou VFW and the Marine Corps awarded Ouellette with certificates and Maine Sen. President Troy Jackson presented him with a flag flown over the state capital.

Ouellette also received letters of congratulations from Sen. Susan Collins and Rep. Jared Golden, and Keaton said a letter from the state Scout council was read.

He commended Ouellette’s family for coming up with the idea to hold a barbecue outside the Scout lodge, and said he was glad that Ouellette, who will be a high school senior this year, was still able to receive his Eagle Scout award at a formal ceremony.

Keaton said six more Scouts are on track to receive the Eagle Scout honor later this year, adding that he hopes the state of the virus and regulations stay the same or improve by that time.

“We’ll just have to roll with the punches,” he said.