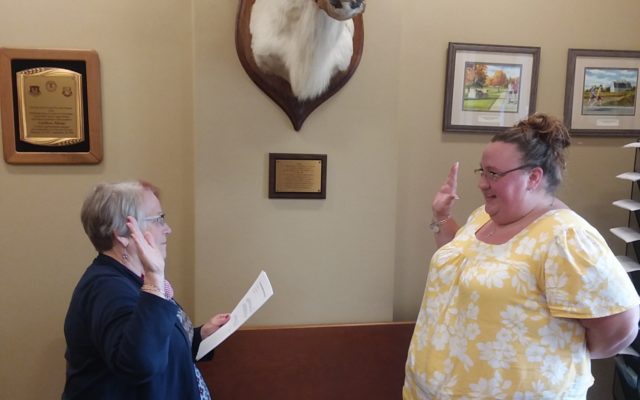 Brissette was born and raised in Caribou, and began working for the city as the assistant city clerk on Feb. 19, 2019. Before that, she had been working as the office manager of Gil’s Sanitation in Presque Isle for two and a half years, and said she applied for the assistant clerk position because she was looking for a change.

On Jan. 2, she was appointed as the deputy city clerk. She said she’s learned a great deal about the city and its people, and looks forward to continuing to do so as the city’s clerk.

Brissette officially began as city clerk at the end of the day on Monday and said this is the first time she has worked as a city clerk.

Having worked as the assistant, deputy, and now city clerk, Brissette said the difference is that the city clerk is responsible for keeping vital records and documents within the city and taking care of elections, and that the clerk generally has far more responsibilities than the deputy clerk.

The clerk is responsible for assigning items to both the deputy and assistant clerks, she said.

As she prepared to take on the new position, Brissette said outgoing city clerk Jayne Farrin, who worked for the city for 13 years, was a tremendous help.

“She has taught me so much,” Brissette said of Farrin.

Brissette said on Tuesday that she is excited to take on the new job and its responsibilities.

“I am looking forward to meeting people, learning new things and serving the city of Caribou,” she said.

On Thursday, Rep. Harold “Trey” Stewart III, R-Presque Isle, announced he will run for a state Senate seat in the 2020 legislative election -- an important change for one of the most powerful representatives in the Maine House.
Pets END_OF_DOCUMENT_TOKEN_TO_BE_REPLACED