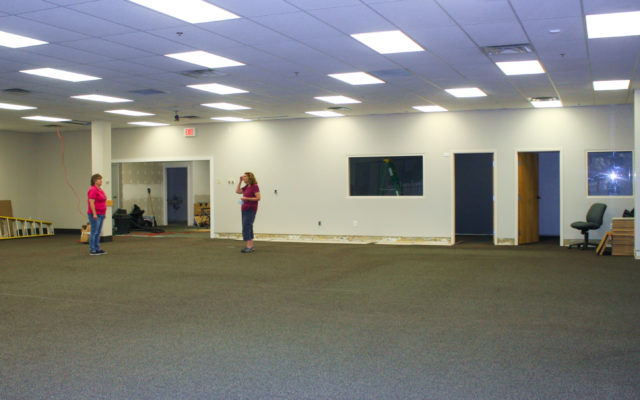 Melissa Lizotte • August 14, 2020
After more than a decade on State Street, Wintergreen Arts Center is ready to embark on a new chapter at a much larger location at the Aroostook Centre Mall.

PRESQUE ISLE, Maine — After more than a decade on State Street, Wintergreen Arts Center is ready to embark on a new chapter at a much larger location at the Aroostook Centre Mall.

Starting on Tuesday, Sept. 1, the nonprofit organization will occupy the former location of Rent-A-Center. The expansive space is 5,309 square feet, more than double the size of the 2,100-square-foot location at 149 State St.

Wintergreen’s executive director, Dottie Hutchins, and the board have been amazed by the outpouring of community support, especially the Wintergreen staff, board members and families who have volunteered time to help with the moving and renovation process.

“The only people we’ve hired throughout this process are a plumber and electrician. The rest have all been volunteers from Wintergreen and their families,” Hutchins said. “They’ve come to help us paint the walls at night and pack up boxes. They’ve all been amazing.”

Wintergreen has so far raised $21,000 through a campaign to cover costs associated with moving to the mall. Major donors have included Wintergreen parents John and Heather Harvell of Presque Isle, Aroostook Partners in the Arts, MMG Insurance, former Pineland Farms CEO Rodney McCrum and his wife Wendy, John Cariani and former UMPI president Don Zillman and his wife Linda.

The Wintergreen board hopes to become debt free as they move to their new space and have more funds aside to focus on monthly rent and the day-to-day expenses of running the organization. 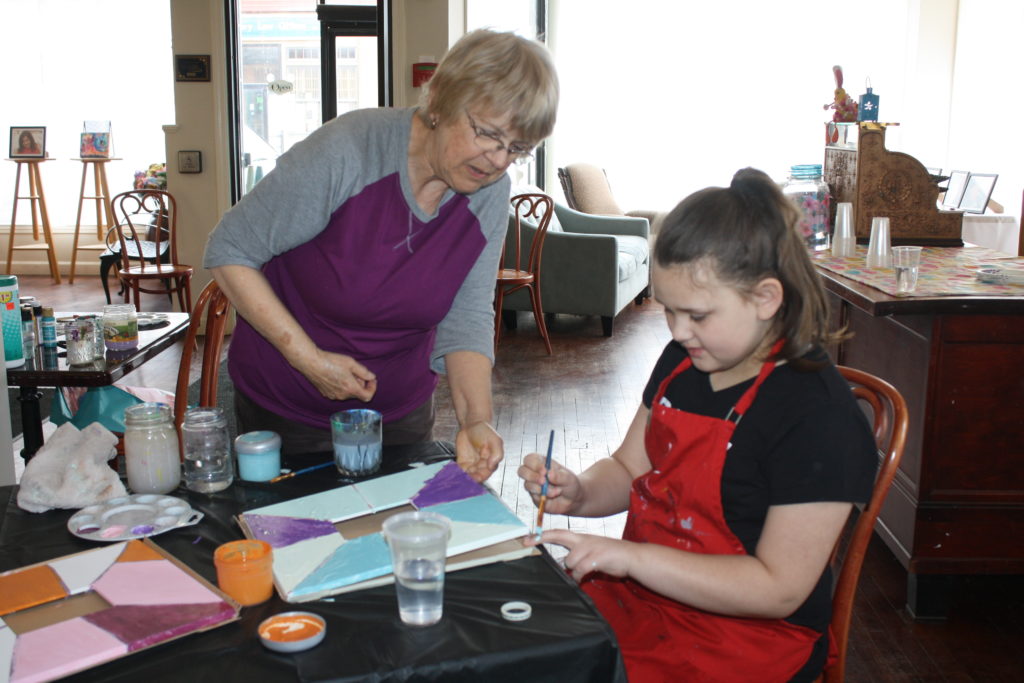 Aroostook Partners in the Arts member Anne Hemphill helps Rheanna Kinnear, 9, put the finishing touches on her acrylic-painted frame during the Kids Art Retreat at Wintergreen Arts Center in 2019. The center will soon move to a new, larger location in the Aroostook Centre Mall. (Melissa Lizotte)

The move is a homecoming of sorts for Wintergreen. When former Presque Isle resident Lara Cannon established the arts center in 2006, she and volunteers held seasonal events and classes at the Aroostook Centre Mall, in a location next to the now closed Sears department store.

In 2008, Wintergreen moved to its current location after two local men — Tony Burgess and Glenn Capp — won the lottery, purchased the building and allowed Wintergreen free rent for 10 years.

After ophthalmologist Curt Young purchased the building in 2016, he honored Wintergreen’s agreement with the previous owners. In 2018, community members and Presque Isle native John Cariani, a Broadway performer and playwright, raised funds to allow Wintergreen to pay rent for 16 months, before its free rent deal was set to expire.

At the time of Wintergreen’s first move, the State Street location was ideal because the organization mainly focused on seasonal arts and craft events for families. 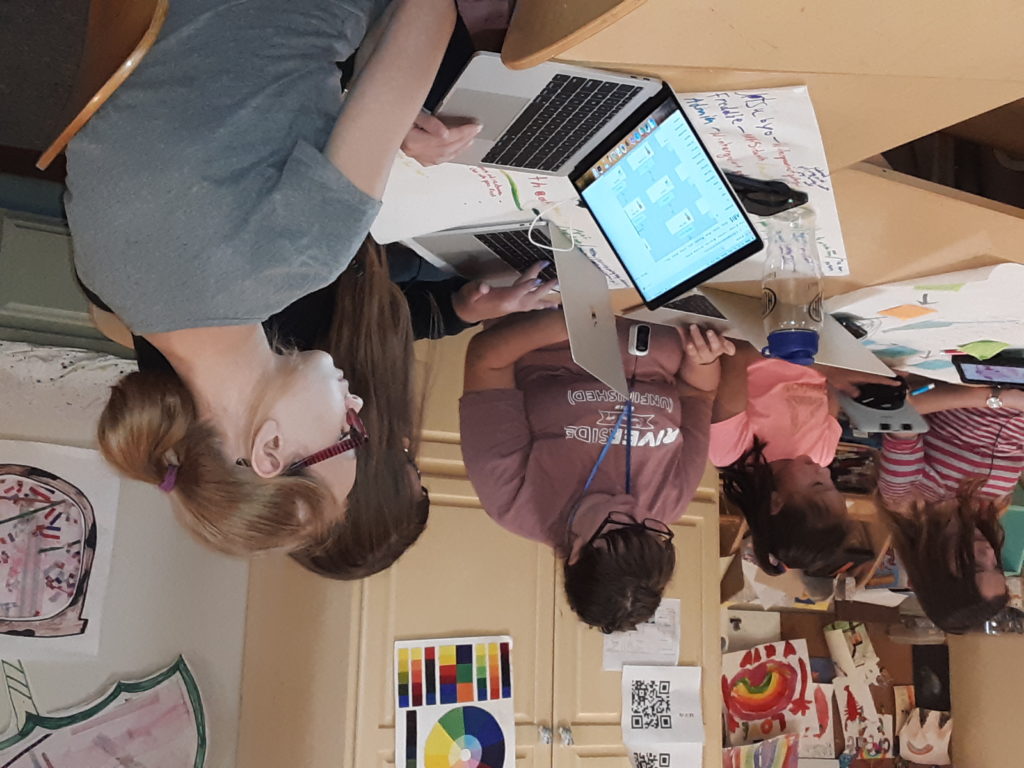 But over the years, Wintergreen has added programs for after-school classes, summer arts, First Friday Downtown Art Walk exhibit openings, events for teens and adults and Under the Willow Tree — their creative preschool.

Due to their expanded programming, Wintergreen’s board realized a larger space would be more ideal to accommodate the number of children, teens and families that they serve. Parking spaces near the State Street building were also limited when compared to those available at the mall.

“We’ve tried having one group of students in the front of the room [at the State Street building] and another in the back, but it just doesn’t work. There are too many kids in one space,” said Hutchins. “But here we can run two or three classes at a time.”

The new Wintergreen location opens up to a 3,000-square-foot main room that will include a reception area, cafe, gallery space, preschool areas, a play kitchen, children’s library and a theater area.

Thanks to a sponsorship from MMG Insurance, Wintergreen will have a separate room for its digital arts classes, known as the MMG Insurance Technology Room. 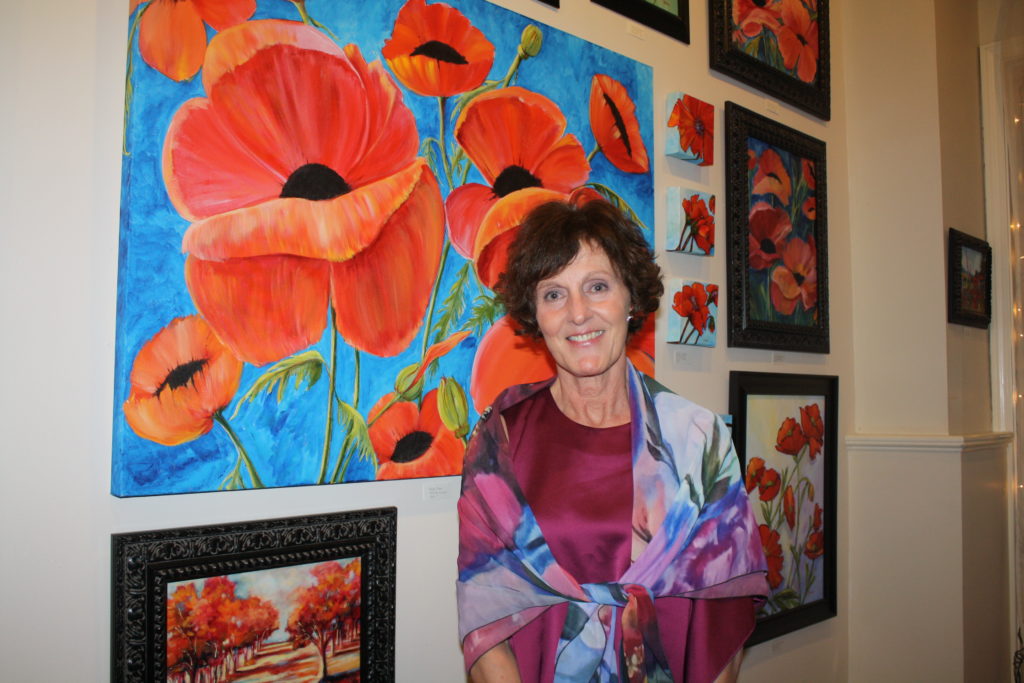 Filomena Irving stands next to her large acrylic painting “Poppy Time” during the opening of her exhibit “Anticipation” at Wintergreen Arts Center in February. (Melissa Lizotte)

To the right of the main room will be the Creative Space Studio, where instructors will typically hold after-school arts and other special arts classes. The Zillmans have sponsored the Creative Space Studio and pledged $5,000 in matching grant funds. Anyone who wishes to contribute matching funds to the Zillmans’ donation can do so through Wintergreen’s website, mailing checks to P.O. Box 1252 in Presque Isle or by calling (207) 762-3576.

Construction is set to end in late August, just in time for the center’s reopening on Sept. 1 and start of the fall preschool classes on Sept. 8. Wintergreen staff expect to begin after-school classes in the weeks after their official opening. A special afternoon session for homeschooled students might be in the works.

Due to the COVID-19 pandemic, Wintergreen does not plan to hold additional classes or major events this fall. The vast amount of space available in the main room is ideal for social distancing, Hutchins said. Students in after-school arts will be seated six feet apart and alone, except for children with siblings. They must be wearing masks when they walk in, but can take masks off only at their desks.

Preschool students will not be wearing masks due to CDC recommendations that children under 5 years old avoid wearing masks. Teachers will wear masks and ask parents to drop their children off at the door.

“After Jan. 1, we’ll see what happens [with the pandemic situation] before we add more programs and events,” said Wintergreen board chair Kim Guerrette Michaud.

Though many people feel nostalgia for Wintergreen’s longtime State Street location, those who have seen children and grandchildren grow up with the center’s programming are enthusiastic and supportive of the changes to come.

“Wintergreen has established itself as a trustworthy entity of the community,” Michaud said. “We’ve heard only positive comments about all the changes.”

Members of the Houlton Band of Maliseets will head to the ballot box in order to determine who will be elected as their new tribal chief.
Pets END_OF_DOCUMENT_TOKEN_TO_BE_REPLACED