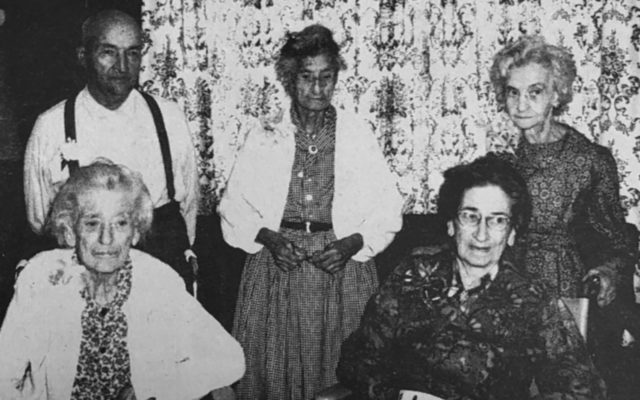 Yvonne Tardie • August 26, 2020
75 Years Ago -  Aug. 30, 1945 Awards made to Scouts at the Legion home -- At a meeting of the Aroostook Forty and Eight held at the home of Ray Goding Post, American Legion, the three Presque Isle Scouts credited with saving lives at Portage, Russell Sprague, Richard Adams, Richard Maynard, were officially presented Legion award medals.

Awards made to Scouts at the Legion home — At a meeting of the Aroostook Forty and Eight held at the home of Ray Goding Post, American Legion, the three Presque Isle Scouts credited with saving lives at Portage, Russell Sprague, Richard Adams, Richard Maynard, were officially presented Legion award medals.

The meeting was presided over by John S. Johnson, of Fort Fairfield, chef de gare of Aroostook who announced that plans were being made for a “wreck” in October. Johnson, Vivian Barker and Preston Boyd represented Aroostook at the State 40 and 8 meeting in Waterville.

John O’Connell spoke to young farmers — John M. O’Connell Jr., managing editor of the Bangor Daily News, was the speaker at a meeting of the Young Farmers of Aroostook held at the Northeastland Hotel. He gave a graphic account of his experiences in the European Theater.

Monticello defeated Hodgdon for baseball title — The scrappy ball team wearing the colors of Monticello defeated Hodgdon 19 to 3 to win the Northern Maine Fair Baseball Tourney. Whereas the Northern Maine League did not operate this season due to the wartime conditions the Fair crown represented the baseball championship of Aroostook. The Monticello club won the title behind the superb hurling of Graydon “Lefty” Swett who quelled the horsehide efforts of Caribou and Presque Isle before taming the Hodgdon clan. Hurling three ball games in four days and winning them all was quite a feat in anyone’s league. Guy Jackins, who was also hurling his third game, was given loose support by clubmates who had played smart, heads-up ball in downing Mars Hill the day before.

Aid to veterans increased — A 28 percent increase in the number of veterans interviewed at Veterans Assistance Centers during the previous fiscal year, from 325,121 to 451,719, had been reported by the Veterans Administration. Administrator of Veterans Affair Donald E. Johnson said most of the veterans (377,143) who visited centers in cities across the nation were high school graduates, some with college training. The remaining counseling sessions were with veterans who were high school dropouts, a group the VA made a special effort to help. Johnson explained that specialists in veterans’ benefits and professional social workers at Veterans Assistance Centers counsel separated veterans. These centers also helped 282,102 veterans file applications for various benefits during the previous fiscal year, an increase of 33 per cent over the previous year, he pointed out. This included a 12 percent increase from 45,781 to 52,207, in the number of young veterans without high school diplomas who applied for education programs under the G.I. Bill.

Presque Isle teenager with Olympic team — A Presque Isle teenager, Lee Thibodeau, was chosen to train with the United States Olympic Equestrian Team. Lendon Gray of Newburgh was the only other rider from Maine chosen to participate in the two weeks’ instruction. There were 125 members of the United States Pony Clubs competing for the honors. Young Thibodeau was chosen after a very successful competition at the United States Pony Club rally in mid-August at the Myopia Hunt Club in Hamilton, Massachusetts, where members competed in the national rally.

Central Aroostook declawed Tigers — The Central Aroostook Panthers 1995 season looked like a replay of their 1994 campaign. After dropping the first game the previous year to Wisdom, CAHS rattled off 10 wins in a row. Again, this season, the Panthers suffered a season-opening loss to the Pioneers, but rebounded to win five straight. Win number five came as CAHS exploded for three second half goals and defeated the Fort Fairfield Tigers 4-1 in boys soccer action in Mars Hill.