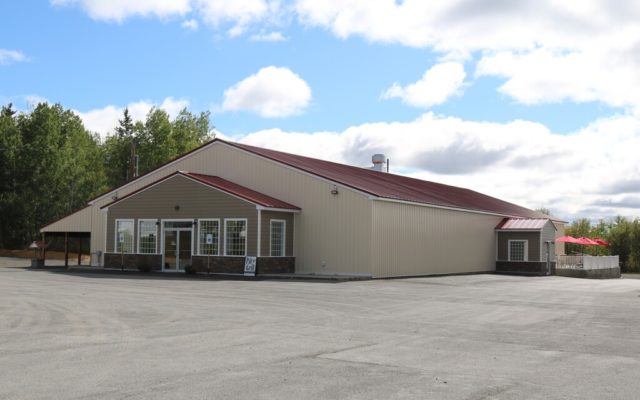 Chris Bouchard • September 11, 2020
The Par & Grill restaurant had been a popular spot for years on Bennett Drive, one of the busiest streets in Caribou. But the restaurant had to shut down on March 18 due to government restrictions brought on by the COVID-19 pandemic.

CARIBOU, Maine — The Par & Grill restaurant had been a popular spot for years on Bennett Drive, one of the busiest streets in Caribou. But the restaurant had to shut down on March 18 due to government restrictions brought on by the COVID-19 pandemic.

“After learning what the restrictions were going to look like, we decided that it would not make sense for us to reopen at the old location until some of these restrictions were lifted or at least eased,” said Chris Richards, who manages the restaurant with his wife Judy Richards.

Richards said they were already well into the project of relocating the restaurant at the time, and decided to finish up preparations so the new Par & Grill would be ready as soon as restrictions eased.

“And the timing seems to have worked out,” he said.

The restaurant officially reopened on Aug. 10 at its new location at 6 Carroll St., across from Melody Roller Rink.

In determining a new location, Richards said he had to make numerous considerations.

“We had outgrown the space that we were in, so we needed more square footage,” he said. “The ceilings would need to be over 10 feet high to accommodate the golf simulator. We needed to have ample parking and we wanted to stay on the same side of town, near the snowmobile and ATV trails.”

The new building seemed to check all of those boxes, he said.

And while restrictions may have eased since March, Richards said opening a restaurant during a pandemic has not been without its challenges, including additional cleaning and sanitizing, which not only takes longer, but also requires more employees. He said that wearing masks in hot areas like the kitchen during busy times can make work tougher for the staff.

“But through it all our crew has been fantastic,” said Richards. “They really have stepped up and are doing an amazing job in an exceedingly difficult situation and we can’t thank them enough.” He also expressed thanks to family and others who helped out with renovations and the move.

Another advantage of the new building, which is roughly double the size of the old location, is that it is large enough to accommodate social distancing guidelines.

“Our original plan was to reopen at the old location as soon as dine-in services were possible,” he said. “Once we were able to evaluate the restrictions, it became clear to us that we would not be able to accommodate enough guests with proper spacing to make it work.”

The new building’s layout allows for spaced out tables inside, in addition to a large outside patio for dining.

“We can now welcome many more guests than we ever could have at the old place,” said Richards.

And while the location has changed, Richards said the hours are the same. They open at 11 a.m. every day until 10 p.m. on Friday and Saturday and until 9 p.m. on Sunday through Thursday.

Considering the circumstances, Richards said everything has been going very well at the restaurant. Richards said they have hired several new employees, so are in the midst of training.

“The traffic has been very good. We weren’t exactly sure what to expect when reopening but have been very pleased with the results so far,” he said.