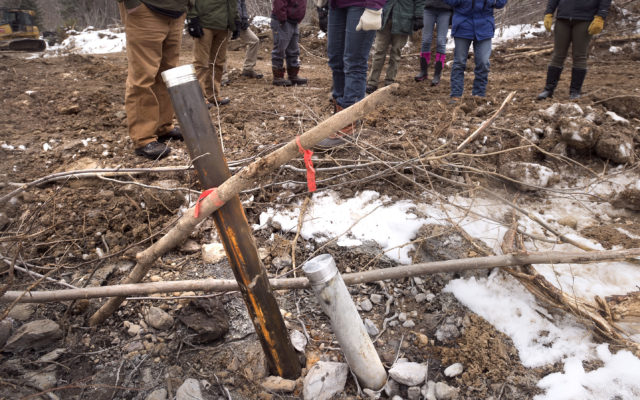 Alexander MacDougall • September 15, 2020
A petition to rezone 528 acres of land near Pickett Mountain to allow construction of a mine in northern Maine has been roiled into some controversy ahead of a Maine Land Use Planning Commission meeting on Sept. 16.

HOULTON, Maine — A petition to rezone 528 acres of land near Pickett Mountain to allow construction of a mine in northern Maine has been roiled into some controversy ahead of a Maine Land Use Planning Commission meeting on Sept. 16.

The petition regards Wolfden Resources, a mining company based in Thunder Bay, Ontario, that wants to establish a mineral mine near Mt. Chase and Baxter State Park in northern Penobscot County, under the name of Wolfden Mt. Chase LLC.

Wolfden has requested that the Land Use Planning Commission exclude several parts of its evaluation of the rezoning petition, including financial viability, waste disposal, water quality and environmental impact, according to a memorandum submitted to the LUPC last week.

Wolfden argues that such decisions are better left to the Maine Department of Environmental Protection, which will review the petition during the permitting process if Wolfden succeeds in its rezoning petition.

“If they are successful in getting a rezone, then the permitting authority will be the DEP under their chapter 200 rules,” Stacie Beyer, planning manager for the LUPC, said Tuesday.

She said Wolfden’s request to exclude several evaluations was unprecedented in her time at the commission.

“I have never seen a request like this in the past,” Beyer said.

Wolfden’s request has drawn criticism from several people and groups opposed to the mine. They argue that Wolfden has failed to provide adequate proof that the mining project will not harm natural resources or the area’s lakes and rivers through its wastewater — some of the precise evaluations Wolfden wants to exclude from the LUPC process.

“This latest gambit from Wolfden’s lawyer shows that the company is trying to make these critical questions disappear by requesting that LUPC narrow its scope,” said Nick Bennett, a staff scientist for the environmental advocacy group Natural Resources Council of Maine. “This is clearly unacceptable, and the request should be denied.”

The Natural Resources Council has been vocal in its opposition to the Wolfden project. While the planning commission has accepted the rezoning petition as complete, the resources council has contended that Wolfden’s proposal does not show how it plans to prevent mine wastewater from being discharged into the groundwater that supplies nearby lakes and streams.

In several public comments submitted to the LUPC, concerned residents also stated their opposition to the project and requested that the planning commission reject Wolfden’s request to exclude parts of the evaluation.

“This sounds like they are asking you to just get out of the way and rezone without any info,” wrote Igor Sikorsky, who owns Bradford Camps in nearby Ashland. “Do not kick the ball down the road on this one. If you do, it opens the door to all kinds of future rezoning requests and you will begin losing your own authority.”

Other groups have been more supportive of the project. Snowmobile and ATV clubs for example said in January that Wolfden has improved the trails system nearby, allowing for a better off-roading experience.

Ron Little, president and CEO of Wolfden Resources, said the company was simply trying to avoid any repetition between the LUPC evaluation for rezoning the area to include mining and the Maine DEP permitting process.

“The DEP is going to do a much, much more exhaustive review of all those points in the mining permit stage,” said Little. “We’re not trying to eliminate anything, we’re just suggesting let’s avoid duplication.”

Wolfden Resources acquired the Pickett Mountain lands in 2017 and later that year began drilling core samples to confirm drilling tests from the late 1970s and early 1980s done by other companies that found volcanic deposits of copper, lead, silver and gold. The latest petition would rezone the area from general management to planned development.

The Land Use Planning Commission meeting will be held at 10 a.m. Wednesday, Sept. 16, in a virtual meeting. The letter the LUPC received from Wolfden’s attorney will be presented to commissioners, who will ask questions about it. Wolfden representatives, as well as any other parties wishing to take part, may present their opinions to the commissioners during the meeting.

For the first time since 2019, there is competition for open seats on the Houlton Town Council
Pets END_OF_DOCUMENT_TOKEN_TO_BE_REPLACED