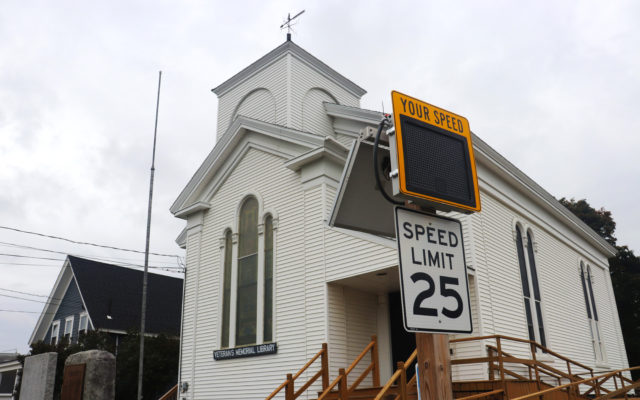 Alexander MacDougall • October 13, 2020
The Veterans Memorial Library, housed in one of the oldest buildings in the town of Patten, is being temporarily shut down after a survey done by the Maine Municipal Association (MMA) found the building was not up to code.

PATTEN, Maine — The Veterans Memorial Library, housed in one of the oldest buildings in the town of Patten, is being temporarily shut down after a survey done by the Maine Municipal Association (MMA) found the building was not up to code.

According to the survey, the MMA noted several deficiencies, such as faulty electrical equipment, lack of handicapped-accessible bathrooms, and anomalies in the structural integrity of the building.

At the Patten selectmen’s meeting on Tuesday, Oct. 6, the selectmen voted to close the building until a decision can be made regarding improvements. Depending on what the cost may be, a new home for the library may have to be found.

“We did not deem it safe at this time for our community or our workers to be in there,” said Nate Richardson, one of the town’s selectmen. “We chose to close it with the intent to review some opportunities we may have to either fix the building, or potentially look into other opportunities with new facilities.”

Originally a church, the building that houses the Veterans Memorial Library was built sometime in the 1850s, making it one of the oldest buildings in Patten. As the town looks to revitalize its downtown, any such plan would have to include what to do with the library.

Rae Bates, a member of the library’s board of directors, said she understood why the town had to close it down, but hoped municipal officials would treat the issue urgently and not forget about the library.

“There’s no shame on the town, because they potentially could face a high insurance claim,” said Bates. “We’re hoping to find some means to get it fixed so the town does not abandon it.”

Richardson said the town understood the importance of having a public library in town, and that they would work quickly to assess the cost of repair to determine what steps the town will take next.

“We as a town want to maintain as many services as we can,” he said. “We obviously want to have a library in town, it’s just how do we maintain or keep that here as a viable solution for our community?”

In addition to the library, the town’s recreation center was also closed after having found to have building code violations as well. Richardson said the town was looking into an agreement with the local schools to try to come to an agreement to use their facilities in the interim while repair costs are being assessed.