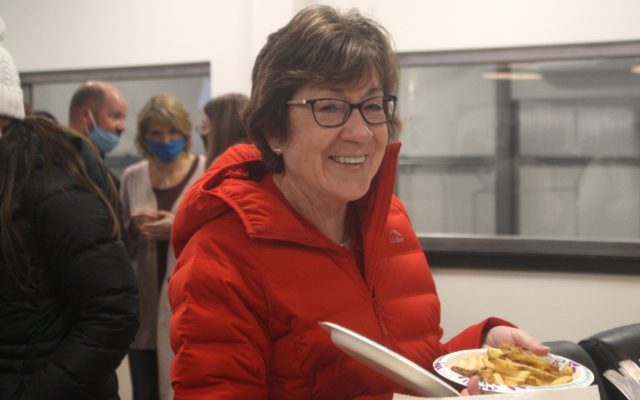 WASHBURN, Maine — As U.S. Sen. Susan Collins fights a difficult re-election campaign against House Speaker Sara Gideon, she found a receptive audience from the potato industry in Washburn on Tuesday.

Collins seemed at ease as she toured the recently opened Penobscot McCrum potato processing facility, advocating for her re-election and munching on potato wedges. It was one of numerous stops the Caribou native made across The County on Election Day.

Dozens of employees gathered to greet Collins, who has long been an advocate of Aroostook County’s potato industry. At one point, they collectively said, “Thank you, Susan!” Many stopped to take selfies with Collins.

Collins spent a lengthy period watching the mechanizations of the new plant from a window, speaking to raw product specialist Paul Lagerstrom and local grower Jeff Irving while doing so.

Collins wore a mask in all her interactions before taking it off to make her re-election pitch to staff. Her speech focused on her advocacy of the potato industry, including fighting against efforts to remove potatoes from federal school lunch programs.

“That’s the kind of thing I can do. I love solving problems,” Collins said. “I am so committed to our state.”

She told employees that she would continue to advocate for Maine’s interests if re-elected, including as chairperson of the appropriations committee — she said she is next in line if she wins her race. The Republican Party would also need to retain control of the U.S. Senate for that to happen.

Collins said that electing Gideon would set a dangerous precedent for the state: she said that Gideon’s campaign had been bankrolled by out-of-state donations from people who didn’t understand or care about Maine.

“If successful, heaven help us,” Collins said. “It’s so contrary to the Maine tradition and the way we conduct ourselves in this state … We don’t lie, we don’t attack [people’s] integrity.”

Speaking after the tour, Collins said she was feeling good about her re-election chances despite close polling. While she said she enjoyed traveling across Maine, it was her longstanding tradition to spend Election Day in her home region of Aroostook County.

“Everywhere I have gone, the response has been terrific. That has been very heartening to me,” Collins said. “I know the polls show a close race, and I’m sure it will be, but I’m very optimistic that I will prevail.”

She had met with Smith as a senior in high school, her first ever trip to Washington, D.C., in which she later became a noted player. Now, as she tries to sway voters in a race expected by many to be close, she is hoping to avoid the same fate as Smith — a long-term incumbent beaten by a well-known Democrat.

Members of the Houlton Band of Maliseets will head to the ballot box in order to determine who will be elected as their new tribal chief.
Pets END_OF_DOCUMENT_TOKEN_TO_BE_REPLACED