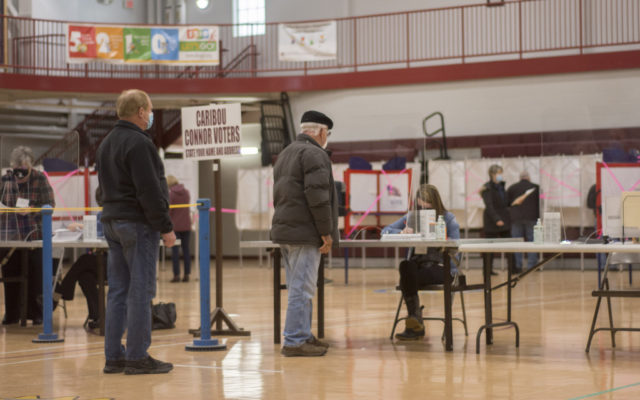 Chris Bouchard • November 4, 2020
Voters in Caribou and Connor Township showed support for U.S. Sen. Susan Collins and President Donald Trump during the Nov. 3 election. They also voted for two new city councilors and one incumbent, according to the unofficial results.

CARIBOU, Maine — Voters in Caribou and Connor Township showed support for U.S. Sen. Susan Collins and President Donald Trump during the Nov. 3 election. They also voted for two new city councilors and one incumbent, according to the unofficial results.

Voters were lined up outside the Caribou Wellness and Recreation Center on the morning of Election Day. Caribou City Clerk Danielle Brissette, said at roughly 10 a.m. that the polls were seeing steady attendance and that the city, which has just over 5,000 registered voters, had received roughly 2,000 absentee ballots.

A total of 2,824 voters supported incumbent Susan Collins for the U.S. Senate, 978 voted for Sara Gideon, 123 voted for Lisa Savage and 74 voted for Max Linn.

Residents narrowly favored Jared Golden for representative to Congress with a total of 2,068 votes, while his opponent Dale Crafts received 1,897 votes. Maine State Senate President and incumbent Troy Jackson was also favored with 2,196 votes while his opponent Brian Schaffer received 1,749.

For District 148 of the Legislature, David McCrea received 104 votes, just one more than Brian Redmond, who received 103. Susan Bernard, who ran unopposed for District 149, received 3,320 votes from local residents.

Voters selected Ronald Willey and Jan Tompkins for the RSU 39 (Caribou and Stockholm) Board of Education with a respective 2,145 and 1,894 votes. Kevin Barnes, who ran unopposed for the Jefferson Cary Memorial Hospital Fund, received 3,355 votes.

Residents also overwhelmingly approved a local referendum question asking voters if they would support amending the city charter to change the budget preparation process from one that starts in October and ends in December of the prior year to a new process that starts in November and runs three months into the new budget year. The new process, according to the amendment summary, lets city officials review expenses and revenues simultaneously and includes a provision that the city will be able to operate on the previous year’s budget numbers until the new budget is adopted. Voters totaling 2,676 favored the charter amendment while 950 were opposed.