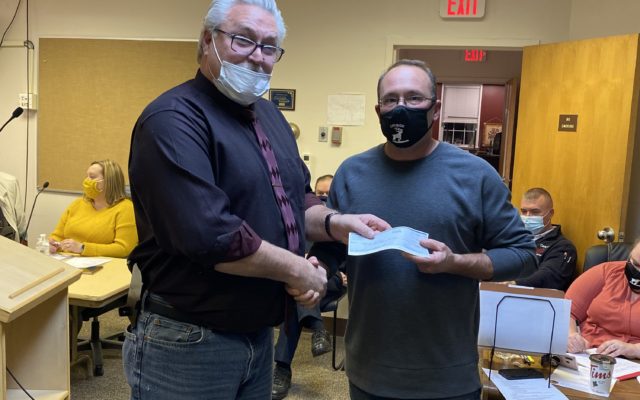 Chris Bouchard • November 18, 2020
With the new Teague Park now in the city’s hands, Caribou City Council explored the possibility of using reserve monies to fund future work at the new facility during a Nov. 16 meeting.

CARIBOU, Maine — With the new Teague Park now in the city’s hands, Caribou City Council explored the possibility of using reserve monies to fund future work at the new facility during a Nov. 16 meeting.

The work includes a splash pad, additional landscaping and paving the parking area between the new park and adjacent recreation center. Altogether, the estimated cost is $481,000. And while the city has money set aside for this task, Caribou City Manager Dennis Marker wrote in the council packet that they are short $278,960.

City Councilor Doug Morrell, earlier in the meeting, presented a check to Caribou Parks and Recreation Superintendent Gary Marquis in the amount of $10,000 for the project, bringing the total amount of money needed down to $268,960.

“This is a donation from my wife and I on behalf of our grandchildren of $10,000 to the splash pad in Caribou for the kids,” Morrell said.

Marker said the Cigaret Shopper in Caribou also recently donated $250 toward the cause.

For the remaining money needed, the city manager said several reserve accounts have been explored in order to make up the difference.

The remainder, about $228,000, would be taken from the city’s Resource Reserve Account under three conditions — that all of the money be used toward park improvements and be considered as a loan; that all of the funds are paid back into the account within five years; and that the city self-imposes a 1.5 percent interest rate, compounded annually, to maintain the reserve account’s value.

Morrell asked Marker if he discussed the proposed 1.5 percent interest rate with the city’s accountant or auditor.

“I know in private business, if I borrow from the company, I have to pay a fair market interest rate back. I don’t know if that’s different for municipalities, but you might want to check to make sure we don’t get bound up somewhere down the road,” said Morrell.

Marker said he had not checked with the auditor on that number, but that municipal bond bank rates are closer to two and a half percent.

The city manager told the councilors that they could move to approve the resolution to use these funds, and the interest rate percentage could be changed later following a consultation with the city’s auditor.

Deputy Mayor Thomas Ayer, acting as chairman in Mayor Mark Goughan’s excused absence, suggested treating the matter as a first read until Marker returned with information from the auditors.

“If a councilor wants to make any more fact finding, we ought to treat this like a first read in an effort to make more informed decisions about this,” he said.

Ayer asked Marker if the total amount included overflow parking lot work, which Marker confirmed, and with no further questions the council moved onto the next agenda item with the intent of discussing the matter further during the next meeting on Nov. 30.