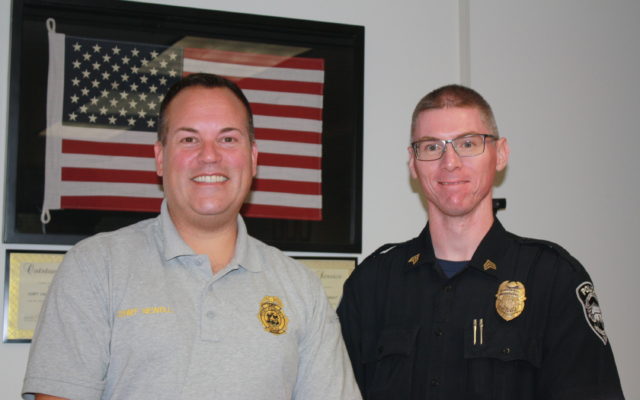 On May 28, 2020, Eagles responded to a call notifying police of a potential drug overdose and attempted to revive the victim using Narcan. Fort Fairfield police have not disclosed the identity of the victim, who died.

Upon further investigation, Eagles found that the drugs the victim had consumed were illegal. He used information from the victim’s cell phone and DNA on the drug packaging to connect the drugs to the alleged trafficker, who has since been arrested on Class A charges of trafficking scheduled drugs that led to the victim’s death.

While addressing the town council on Nov. 18, Newell praised Eagles’ persistence in pursuing the investigation and said that he was “an example for other officers to follow.”

“Your dedication to the victim and their family has not gone unnoticed,” Newell told Eagles, who declined to speak during the meeting. “I cannot even begin to tell you how proud I am to have you as my sergeant and a member of this department. Congratulations on an exceptional job well done.”

In other business, the council heard an update from Fort Fairfield Fire-Rescue Chief Timothy Browning about the hiring of new fire and EMS staff. Browning swore in Cody Fenderson as the new deputy fire chief.

Fenderson officially began his duties with Fort Fairfield Fire-Rescue on Oct. 19. He previously worked for the Presque Isle Fire Department, has more than a year of experience in fire and EMS duties and teaches in Northern Maine Community College’s paramedic program.

Browning told councilors that the first round of interviews for EMS personnel has been completed. When all individuals are hired, the fire-rescue department will consist of eight full-time firefighters and EMTs and 25 on-call firefighters/EMTs.