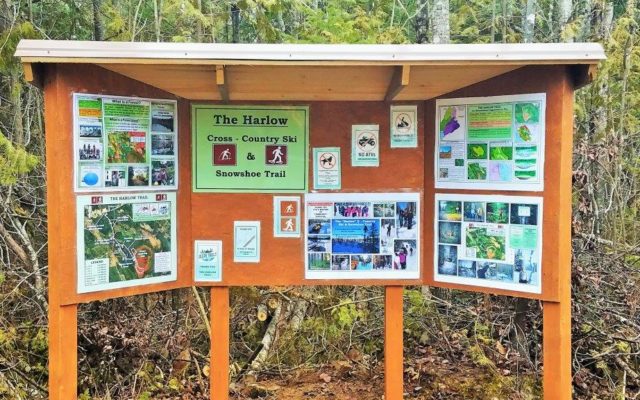 Contributed • December 28, 2020
The Harlow Cross-Country Ski and Snowshoe Trail has a new roadside sign and trailhead  kiosk, thanks to the creative work of Paul Cushman of Wytopitlock and eight students from East Grand Community School.

DANFORTH, Maine — The Harlow Cross-Country Ski and Snowshoe Trail has a new roadside sign and trailhead  kiosk, thanks to the creative work of Paul Cushman of Wytopitlock and eight students from East Grand Community School.

According to Elbridge Cleaves of Weston, Cushman began digging the holes for the in-ground anchors of the kiosk one early December morning when he heard the voices of youths resounding from the field across from the Trailhead.

Joining him for the dig were Tammi Matula, an outdoor education instructor for East Grand, along with several of her students. The group hiked the snowmobile trail to meet up with Cushman and got right to work using crowbars, shovels, sledgehammers, rakes, nail hammers, staple guns, a generator, and post diggers. 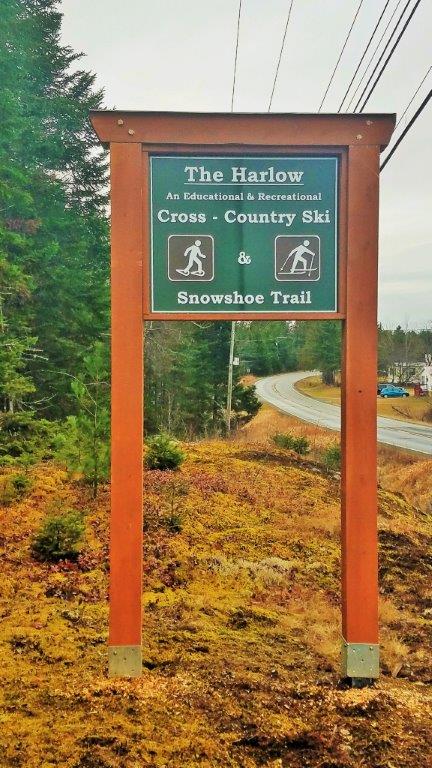 The new sign at the roadside entrance to the Harlow Cross-Country Ski and Snowshoe Trail has been erected.
(Courtesy of Elbridge Cleaves)

“The slow, deliberate process of sinking those kiosk foundation holes into the rocky ground of the Harlow induced talk of soils,” Cleaves said. “Topics such as ‘A’ Horizon, ‘B’ Horizon, coloration, rock compaction and hard pan were mused over by students and Paul alike, all the while shovels and crowbars actively in-hand.”

Before the kiosk was set in place the girls team had already designed and affixed the laminated educational and informational posters, and safety and use signage to the kiosk display area. Even the register box got its own stand-alone anchor, relieving a poplar tree from such duty. The final act was frozen ruts caused by a vehicle spinning at the trailhead. Cleaves said repairing the damage was not easy, but strong arms, a sledge hammer and a rake restored the surface for winter plowing.

Before beginning the trek back to school, the team dashed out to help erect a new roadside sign. The work progressed without a hitch, with anchors driven, uprights installed and the top plate thumped into place with a wooden mall, post and beam construction complete with wooden pegs.

With  the new sign installed it was many thanks to all, especially the students of East Grand who shared in the ownership, stewardship and  community service work of the Harlow Trail.

With exception of the uprights and backing panels in the kiosk, all of the posts, beams and lumber were sawed from Cushman’s portable mill in Wytopitlock with native cedar from logs harvested and donated by the Baskahegan Company.