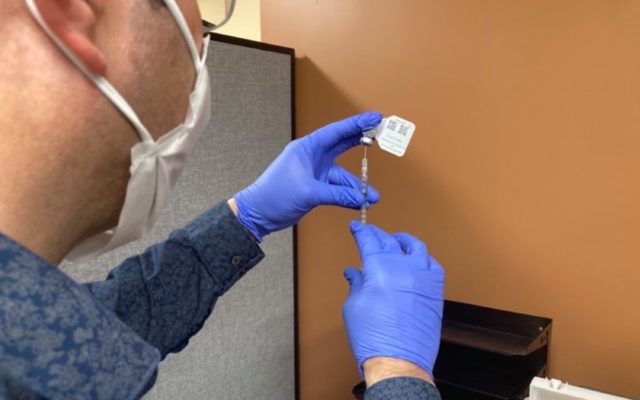 Light at the end of the tunnel: an A.R. Gould nurse describes receiving COVID-19 vaccine

David Marino Jr. • January 4, 2021
After hundreds of thousands of deaths nationwide from the COVID-19 pandemic -- along with fundamental changes to the public’s way of life -- millions across the United States are finally getting vaccinated from the coronavirus, including in Aroostook County.

PRESQUE ISLE, Maine — After hundreds of thousands of deaths nationwide from the COVID-19 pandemic — along with fundamental changes to the public’s way of life — millions across the United States are finally getting vaccinated from the coronavirus, including in Aroostook County.

As cases shot up in The County, Northern Light A.R. Gould Hospital in Presque Isle received its first shipment of the Pfizer-BioNTech vaccine on Dec. 15. And on Dec. 16 and 19, nearly 400 employees at the hospital became the first people in The County — and among the first in Maine — to get a COVID-19 vaccine.

Nurse Aron Chalou — who manages the hospital’s County Dialysis Center — was among those who received a shot in a clinic held on Dec. 19.

Chalou said the shot felt like others she had received before. Indeed, it is a simple prick, not unlike the flu shots hundreds of thousands of Mainers get every year. Yet, the experience filled her with optimism.

“The best word I have to describe the feeling [after receiving the vaccine] is ‘hopeful.’” Chalou said. “Hopeful for a glimpse of light at the end of a very long tunnel.”

As is the case for hospitals nationwide, the first vaccine doses at A.R. Gould were reserved for hospital staff most likely to contract the virus during their duties and those who treat at-risk populations. Chalou’s work with patients receiving dialysis puts her in close contact with people who are likely to face severe or fatal health risks if exposed to COVID-19.

The first dose is not the end of the road for Chalou and others who have received a vaccination worldwide. They will each need to get a second dose of the vaccine 21 days after the first to receive full protection. Health officials are also still unclear on how long the dosage provides its recipients protection from the virus.

Still, it was an important moment for Chalou: she was among the first in the United States to get the shot, only a week after its emergency use was approved by the U.S. Food and Drug Administration.

“This entire experience has been a historical moment, both as a health care worker and as an American citizen,” Chalou said. “I am thankful that we had early access to the vaccine and was incredibly proud to be one of the first in line.”

While the vaccine’s availability is a turning point in the fight against the virus, vaccinating hundreds of millions of people is no easy task. Medical officials remain worried that Americans who refuse to get the vaccine could allow the spread to continue, especially as misinformation about COVID-19 proliferates across American society.

During the 2019-2020 flu season, about 68 percent of Mainers aged six months to 17 years old and 53 percent of Mainers older than 18 received flu vaccines, according to U.S. Centers for Disease Control and Prevention data. While both rates were higher than the U.S. average, Maine ranked the lowest in New England.

It is unclear if the stakes of the coronavirus — which is far more contagious and has a far higher fatality rate than the common flu — will drive more people in Aroostook County to get vaccinated against it.

Recent polls paint an optimistic picture: more Americans than ever say they are ready to get a COVID-19 vaccine, though a Gallup poll from November found that 39 percent said they would probably or definitely not get the vaccine.

Chalou said it was important that Americans trust their healthcare providers as they seek information about getting vaccinated.

“There is so much disinformation widely spread on the internet, especially on social media, it can be difficult to discern what is true,” Chalou said. “[Health care providers] have accurate information and valid research available to them and will help you make the best decision.”

It was a freezing day across The County, but you could hardly tell from the turnout. Even after a massive surge in absentee ballot requests across the Central Aroostook area, droves of people came out to vote in Presque Isle, Mapleton, Washburn and Fort Fairfield.
Pets END_OF_DOCUMENT_TOKEN_TO_BE_REPLACED