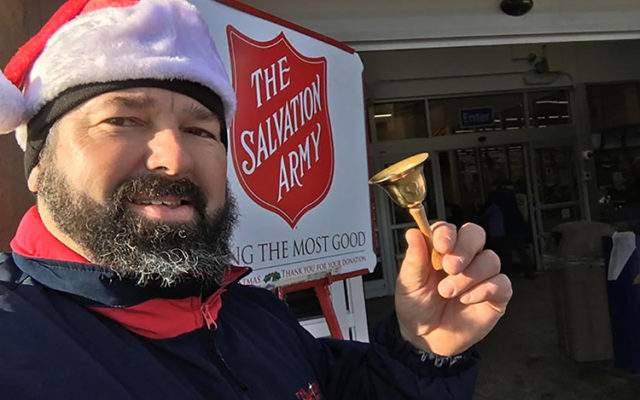 This campaign extended across Aroostook County, as the Houlton Salvation Army sent volunteers to collect donations from as far north as Caribou to as far south as the Penobscot County town of Lincoln. Pastor Frank Nataluk, who oversees the Houlton branch of the Salvation Army, said the campaign across Aroostook met its goal this year of raising more than $50,000, with a total amount raised this year of $51,778.31.

“We’re very thankful to The County for stepping up and giving, because they’re not required to give to us,” Nataluk said. “They don’t owe us anything. They just want to see their neighbor helped when they’re in need.”

Nataluk said this year’s volunteer corps was slightly smaller than in previous years, likely because people wished to remain distant due to COVID-19. But he thanked those who did volunteer and said they remained devoted to their positions.

“The small amount of volunteers we had this year were more dedicated — they did more hours,” he said. “[They] didn’t feel the pandemic would hurt them.”

Weather also played a factor in the obstacles faced by volunteers in collecting donations. Power outages resulting from winter storms caused the campaign to lose a day and a half’s worth of donations.

Because of these concerns this year, the goal amount was lowered from in previous years, and raised around $2,000 less than last year. But the Salvation Army still managed to meet its goal, and may have exceeded last year’s if not for the bad weather days.

Running from Nov.19 to Christmas Eve this year, with the exception of Sundays, the campaign in Aroostook looks to provide humanitarian aid for residents in things like assistance for rent and heating, as well as provision of food. Locations served by the Houlton branch this year included Wal-Mart, Andy’s IGA, Mardens, Walgreens and County Yankee in Houlton. In Presque Isle, Star City IGA, Wal-Mart and JCPenney were also staffed by volunteers, as was Sleeper’s in Caribou. The Wal-Mart in Lincoln was also served by the Houlton branch.

It was a freezing day across The County, but you could hardly tell from the turnout. Even after a massive surge in absentee ballot requests across the Central Aroostook area, droves of people came out to vote in Presque Isle, Mapleton, Washburn and Fort Fairfield.
Pets END_OF_DOCUMENT_TOKEN_TO_BE_REPLACED