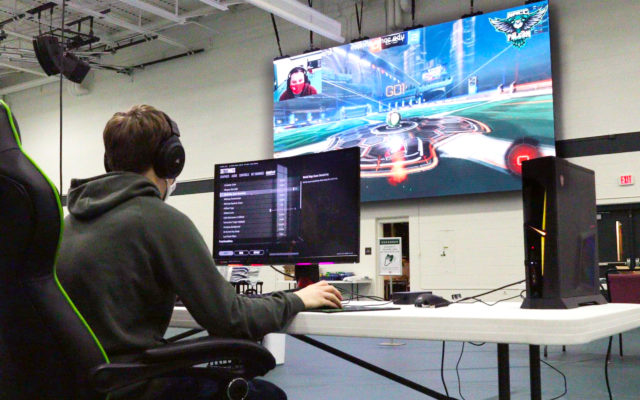 First ‘Gaming for a Cause’ fundraiser aids local groups

Starting at noon on Dec. 12, the athletes live-streamed their gameplay via the online platform Twitch, broadcasting from the NMCC gymnasium. The team aimed to stream through the following day at noon.

The event raised $1,200 through online donations, which will be evenly distributed to the selected charities.

“We were very excited to see the donations come in,” said NMCC Esports Coordinator and Coach Chris Perry. “A fully online fundraiser can be intimidating for people, and we’re very happy that the community saw our effort and showed support.”

With many charitable fundraisers restricted by COVID-19 this year, the team wanted to do their part to support organizations that had a personal impact on their lives while growing up in Aroostook County. The athletes chose Wintergreen Arts Center, Anah Shriners of Aroostook, and St. Apollonia Dental Clinic.

In years past, St. Apollonia held the Festival of Trees on NMCC campus each December, but was unable to this year; last year’s event raised nearly $100,000 after expenses. The Anah Shriners of Aroostook typically raise funds through their annual Shrine Circus to support their nationwide network of nonprofit children’s hospitals. The circus was also cancelled this year.

To generate interest, the team held a giveaway during the event over social media, with prizes including Visa gift cards and unique electronics.

“We tried to think of ways go get people excited, and social media giveaways can certainly have that effect,” Perry said.

Additionally, local broadcast personality and NMCC alumnus Dick Palm attended the event and worked with the college to create promotional videos to be shared online. Palm’s participation was part of a volunteer promotional partnership with 2in1 LLC, a local media company Palm founded this year with his son and business partner Jon Adams.

Prior to the event team member Gavin Cote expressed hopes that Gaming for a Cause would help the Falcons better connect with the community through their love of gaming.

“This community has put a lot of trust in us starting the esports program, so we want to show that we’re about more than just playing video games. We really want to give back to the community,” Cote said in a Nov. 12 article in The Star Herald.

The event had originally been scheduled a week earlier, but was postponed due to the 13 inches of snow Presque Isle received that weekend. Unfortunately, the event’s new date also aligned with an incoming snowstorm. The National Weather Service predicted 4-8 inches of snow and ice to accumulate overnight into the following morning.

Around midnight, Coach Perry sent the team members home to continue their live streams from their home computers and consoles.

“The most important thing is always safety,” Perry said. “Some of the team members wanted to stay through the night, but we thought it best to ensure nobody needed to drive in hazardous conditions.”

The newly-remodeled NMCC gymnasium featured four of the players’ live streams on the 24-foot screen. Later into the evening, Perry played a movie in one quadrant of the large screen. In other areas of the gym, the team had arranged multi-screen setups for consoles like the Nintendo Wii, and a virtual reality station featuring an HTC Vive that simulated a high-speed roller coaster.

For more information about the esports program at NMCC, visit esports.nmcc.edu.

It was a freezing day across The County, but you could hardly tell from the turnout. Even after a massive surge in absentee ballot requests across the Central Aroostook area, droves of people came out to vote in Presque Isle, Mapleton, Washburn and Fort Fairfield.
Pets END_OF_DOCUMENT_TOKEN_TO_BE_REPLACED