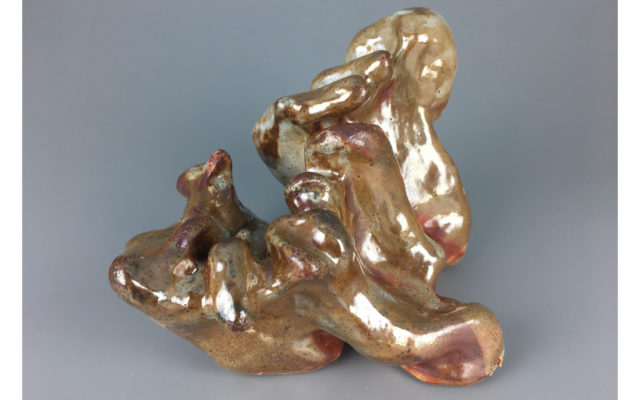 Contributed • February 1, 2021
The University of Maine at Presque Isle is presenting this year's Robert Wanbaugh Memorial Art Award to Brianna Gerrish of Presque Isle. Her glazed stoneware sculpture “Brux” will be added to the University's permanent art collection.

PRESQUE ISLE, Maine — The University of Maine at Presque Isle is presenting this year’s Robert Wanbaugh Memorial Art Award to Brianna Gerrish of Presque Isle. Her glazed stoneware sculpture “Brux” will be added to the University’s permanent art collection.

“Brianna is an exceptional artist — the body of work that she produced during her senior year is quite special in terms of both its form and content, and shows an artistic maturity that far exceeds what one might expect from a BFA candidate,” UMPI’s Reed Art Gallery Director and adjunct art faculty member Frank Sullivan said. “Her work explores the universal in Nature via forms whose graceful and curvilinear shapes seem to be products of Nature herself, each with its own unique character, personality, and lifeblood.”

Sullivan explained that the sculptures are composed of a variety of earthy colors, both warm and cool, similar to those found in the natural world. Their surfaces, the product of the artist’s fearless embracing of the often-unpredictable nature of the glazing and firing process, proudly display irregularities and imperfections, which appear not as blemishes, but as scars of a courageous life subjected to the forces of the natural world and that belie each object’s inherent gracefulness and beauty.

“Firing my work here in the gas kiln meant negotiating with the never ending intricacies of the firing atmosphere,” Gerrish said of her work. “In a fateful duel between the chaos and order of the kiln, forces of fire, air, water, and earth were reconciled. The resulting work is as elusive and mystical as it is deeply physical. Brux in particular speaks to that — it was born out of a magical firing.”

“Brux is a personal favorite of mine and I am thrilled at the opportunity to acquire it for the University’s collection and to proudly display it on campus,” Sullivan said. “Brianna’s enthusiasm and work ethic were an inspiration to her fellow students while she was a student at UMPI and I believe she will be able to continue as an inspiration through the presence of this piece on campus.”

The Robert Wanbaugh Memorial Art Award was created in 2008 with an initial gift to the Foundation of the University at Presque Isle from Wanbaugh’s wife, Dr. Rebecca Herrick Wanbaugh, UMPI professor emerita of history who taught at the University for 34 years. Wanbaugh was born in 1936 in Saginaw, Michigan. He served in the U.S. Air Force, as a lieutenant with the Presque Isle Police Department, as purchasing agent/personnel director for the City of Presque Isle, as acting executive director of the Presque Isle Urban Renewal Authority, and later as director of safety and security at the University of Maine at Presque Isle. Wanbaugh earned his bachelor of fine arts degree from the University in 1988. As a senior art student, he received the Joel Dana Senior Art Scholarship Award and, in 1986, he earned the Photography Award of Excellence from the Photographers Forum of Santa Barbara, California.

The interest from this endowed award fund, that now includes a planned gift from Dr. Wanbaugh’s estate, is used for the annual purchase of an outstanding work of art by a graduating UMPI student. The work will join the permanent collection of the University and will, when possible, be displayed in a University building as part of the campus collection.

The University received a final gift from Dr. Wanbaugh’s estate in 2020, which has added to this fund and allowed for a larger student award each year.

“We’re grateful to Dr. Wanbaugh for her generous gifts that have allowed the Robert Wanbaugh Memorial Art Award to continue in perpetuity,” Dr. Deborah Roark, executive director of University Advancement and External Affairs, said. “The Foundation of the University at Presque Isle is pleased to be able to help individuals with planned gifts through their estates after they pass away to support something near and dear to their hearts — gifts that can have such far-reaching impacts for our students and our campus over time.”

The Foundation of the University at Presque Isle, a private non-profit organization, manages the funds that support scholarships and other gifts to the University. The foundation’s assets have increased substantially over the years, with current assets totaling $6.4 million. For more information about establishing or supporting scholarships or other University needs, contact Dr. Deborah Roark, executive director of University Advancement and External Affairs, at 207-768-9755 or deborah.roark@maine.edu.