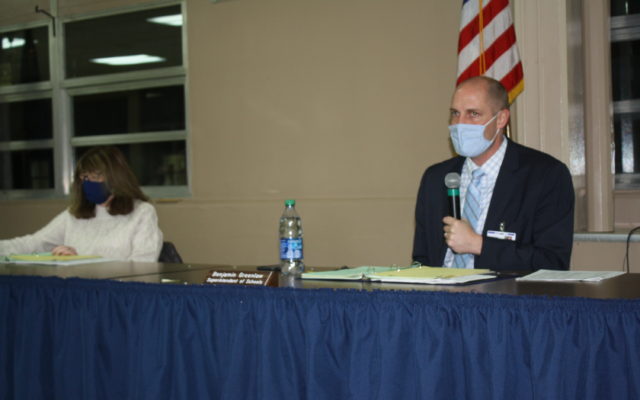 Melissa Lizotte • February 11, 2021
SAD 1 Superintendent Ben Greenlaw reviewed the preliminary numbers for the state's contributions to the district budget for the upcoming school year during Wednesday’s school board meeting.

PRESQUE ISLE, Maine — SAD 1 Superintendent Ben Greenlaw reviewed the preliminary numbers for the state’s contributions to the district budget for the upcoming school year during Wednesday’s school board meeting.

The state numbers will become official in the coming months when the governor’s budget is passed.

Based on the preliminary reports, the state will allocate $13 million, with the remaining $6 million of the $19.4 million total to be paid by communities within the district. Presque Isle is estimated to contribute $4.4 million while the towns of Mapleton, Chapman, Castle Hill and Westfield will pay $1 million, $250,825, $212,641 and $244,373, respectively.

Greenlaw explained that the state bases its allocations on the number of students in a school district and the tax valuations of communities within the district. The latest report from the state has determined that SAD 1 has 1,722 students total, 38 fewer from one year ago during calculations for the 2020-2021 school year.

Despite the decrease in student population, the district is still on track to receive more than the previous year — $19.4 million compared to $18.7 million, Greenlaw said. One of the most important aspects of the state’s funding is the Essential Programs and Services portion, which determines how many teacher and other staff positions the district can realistically fund.

Thus far, the state’s EPS numbers will allow SAD 1 to fund 107 teachers. Greenlaw said the district currently employs 102 teachers, five fewer than what they are allowed, but they make up the difference by employing more ed techs. Currently the district employs 19 ed techs, nine more than the state’s recommended 10 positions.

SAD 1 also expects to receive at least $62,125 for EPS, part of which they can use to support “economically disadvantaged” students, identified primarily through the district’s free breakfast and lunch programs, and for English language learners. More than 540 students in the district are identified as economically disadvantaged, while 13 students at the elementary level are English language learners.

In other business, SAD 1 is eligible for $1.7 million of funding through the CARES Act’s Elementary and Secondary School Emergency Relief Fund, Greenlaw said. The funds are part of approximately $13.2 billion that Congress has set aside for the Education Stabilization Fund of the CARES Act to help schools promote student safety and learning during the pandemic.

Unlike past funding that SAD 1 has received through the CARES Act, the district will have until September 2023 to spend all the funds.

“We’ll have more time to think about how to spend these funds as opposed to being told to spend $3 million in three months,” Greenlaw said.

Greenlaw noted that the district has submitted an application for the ESSERF funds and will receive notification in the near future. He expects that the district will use part of the funds to prepare for possibile school reopening scenarios for the start of the 2021-2022 school year.

“If the pandemic is still at the level we are now, we’ll need to open safely and we’ll need additional staff to address remote learning and to help us if we open in a more traditional manner,” Greenlaw said.

The school board approved to extend the position of a temporary, yearlong school nurse one more year in anticipation of future pandemic-related needs.

Greenlaw also gave a brief update on the recent news regarding Presque Isle High School’s varsity hockey team. Seventeen team members and two staff members associated with the team are in a 10-day isolation period after being exposed to a hockey player on the Old Town/Orono team who tested positive on Monday. The teams played against each other last Saturday.

“Usually the CDC recommends waiting five days after potential exposure to receive a COVID test. We have not yet heard about any positive cases among our students,” Greenlaw said.

The next SAD 1 board meeting will be held at 5:30 p.m. Wednesday, March 17, at the Presque Isle High School cafeteria.