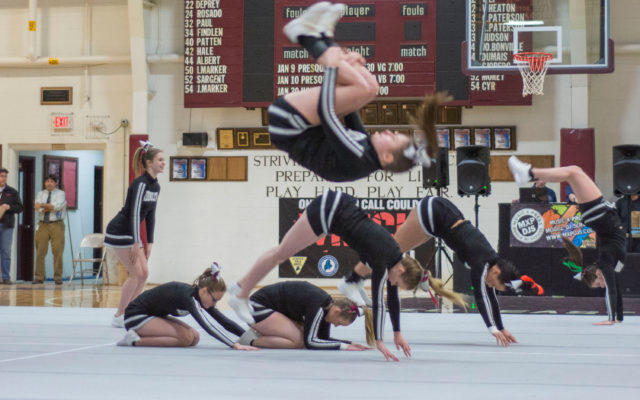 HOULTON, Maine — Instead of a high school gymnasium packed with screaming fans, this year’s cheering competitions will look remarkably different.

In much the same way that basketball and hockey made adjustments to be held this winter, high school cheering competitions will be like nothing ever seen before as teams will record their routines to be judged at a later time.

Presque Isle will participate in several virtual competitions including the Ellsworth Invitational, Penobscot Valley Conference, Cheers from the Heart (out of Wells), Aroostook League and states, according to Athletic Director Mark White.

For the state championship meet, each school’s athletic administrator will be emailed a template with a code word to be incorporated into the team’s competition video to verify that it was taped on the designated day.

The cheer season officially began Jan. 4 for those schools that were open for in-person classes. Any schools that have had to switch to remote learning models must cease all extracurricular activities (basketball, hockey, cheering) until such time that the school reopens.

The Maine Principals Association cheering committee revised dates for the competition, with team cheer performance videos due on March 18 to be judged two days later. Champions in each class will be announced during a live streaming of the performances, tentatively scheduled to air on the NFHS Network on Saturday, March 27, with first and second-place winners announced.

“We are not cheering at games, but we are preparing for two virtual competitions,” explained long-time Houlton varsity cheer coach Renae Foley. “We have been given a window of time that our routine needs to be recorded and submitted to be judged.”

Houlton has a squad of 15 girls on the mat this year and has fortunately avoided losing any participants due to COVID-19 concerns.

Other County squads were not as fortunate.

“Our numbers are down significantly compared to last year, due to the virus,” Presque Isle coach Maddie Bagley said. “It’s both the risk of getting the virus or having to wear the masks. [Practice] has been proving to be difficult as cases hit in our schools. It has been normal to have at least one and as many as four quarantined at a time. So we are doing a lot of video chats and having girls learn virtually from home.”

Caribou coach Erin (Susee) Gilson said her Viking squad is also smaller than in years past, with just eight members, but added those eight have been hard at work perfecting their routine.

“We wear masks the whole practice, so we add in masks and water breaks when needed,” she said. “The girls stay socially distanced unless they are stunting. With stunting, the girls were put together into their stunt groups which is four of them together. Once their stunt group was decided they are only allowed to come within six feet of those that are in that same pod with them while stunting.”

Typically, a cheer routine has a number of elements that must be included in order to score points. This year vocal cheer and pyramids will not be allowed to help reduce potential exposure. Routines will be judged solely on dance, tumbling, jumps and stunts.

Foley said the Houlton squad was disappointed to learn that pyramids would not be permitted for routines this year, as that element has traditionally been one of Houlton’s stronger elements. Schools are able to include partner stunts as long as the stunt group stays in one cohort.

Overcoming the COVID-19 challenges has been tricky.

Bagley, who is embarking on her second year as coach for Presque Isle, said her squad follows a strict mat sanitation process that is conducted daily and cheerleaders must wear their masks at all times during practice.

“It has been challenging getting them acclimated to wearing a mask while working out,” she said. “We have been working with our choreographer virtually as well.”

Gilson added the Vikings practices and routines may look different from the years past, but the determination remains the same.

“We are not cheering at basketball games this season, which was hard to accept, but we all understand that to be able to have any type of season sacrifices have to be made,” Gilson said. “Last season one of our biggest goals was to bring back one of the true roles of a cheerleader and we worked hard to bring the school spirit to the basketball court. We had a lot of fun cheering on our varsity basketball teams and it was something we were proud to do. With that being said we do have plans to keep the spirit alive for our basketball teams even though we can’t be on the sidelines.”

Under normal circumstances, most cheering squads would have spent the summer participating in cheer champs and also taken part in a fall cheer program to gear up for the busy winter competition season.

“We would have automatically hired a choreographer, and ordered routine music, but with all the uncertainty of a winter season after not having summer activities or a fall season, it became stressful as a coach wondering what the best option would be moving forward with regular plans for the winter season,” she said. “I came to the decision to go ahead with keeping it as normal as possible. We hired our choreographer and ordered our music while following all the guidelines and I am happy I made that decision.”

Gilson said the uncertainty of whether there would even be a cheer season was daunting.

“The pandemic has caused many changes this season, but we are extremely thankful just to have a season at all,” Gilson said. “The girls work hard and love what they do. Being able to continue with a season this year has been a great outlet for all of us. It’s been a way to give all of us some sense of normalcy and fun during a stressful time.”