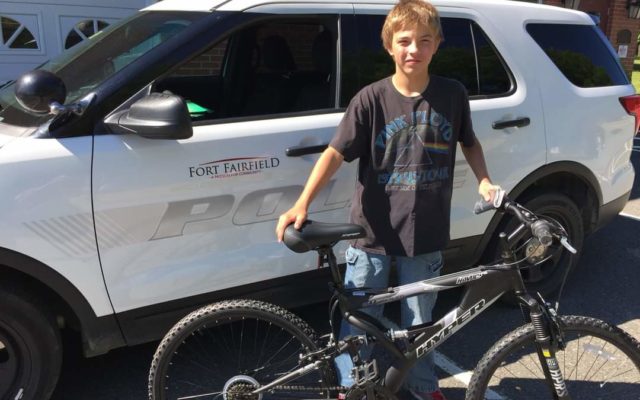 Melissa Lizotte • February 14, 2021
On a warm summer day in July 2016, then 13-year-old Jacob Williams woke up to find Fort Fairfield Police Chief Shawn Newell ready to take him on a surprise trip to the police station.

FORT FAIRFIELD, Maine — On a warm summer day in July 2016, then 13-year-old Jacob Williams woke up to find Fort Fairfield Police Chief Shawn Newell ready to take him on a surprise trip to the police station.

But the teen was not in trouble, as he initially thought. Instead, Newell presented Williams with a brand-new bicycle to replace Williams’ old bicycle that had broken. The police department had received the bicycle from an elementary school student who won the bicycle but already had one.

From then on Williams and his bicycle were nearly inseparable, said his mother, Bessie DeWitt, and he wanted other children to have that same experience.

“He wanted to pay it forward. He was collecting bicycle parts to make his own to give to other kids,” DeWitt said.

Due to a tragic turn of events, Williams never got to live out his act of kindness. Nearly a year after receiving his bicycle from the police department, Williams drowned while swimming with friends in the Aroostook River.

Williams would have turned 18 on Jan. 29, 2021. To honor his memory, DeWitt, who now lives in Presque Isle, has embarked on a mission to give Aroostook children the joy of riding a new bike.

DeWitt initially thought she would purchase two new bicycles to give away in honor of her son’s birthday. But then someone suggested she write about her initiative on Facebook. By the end of that first day, folks had donated $600 for DeWitt to purchase more bicycles. At the end of the week, the fundraising total leapt to $1,700.

Since then DeWitt has teamed up with Newell to raise more awareness of the project, called Riding with Jacob. They have since raised $2,400 and have purchased 17 new bicycles. In the coming weeks they plan to purchase at least six or seven more bikes and raffle them off on the police department’s Facebook page.

Once a photo of each bicycle is published, folks can place a child’s or teen’s name in the comments section below the bicycle of their choosing. Once the raffle has ended DeWitt and Newell will draw names of the winners live on Facebook.

For Newell, taking part in the bike giveaway has brought back memories of the day he gave Williams his new bicycle. He recalled that Williams thought he was in trouble, since Newell did not reveal the purpose of their ride to the station at first. But once Williams realized the bike was his, Newell saw the biggest, brightest smile spread across his face.

“He was always outside riding his bicycle. He rode it like a Harley Davidson,” Newell said. “For him that bike was his freedom. It was how he got to and from his friends’ houses.”

In the more than three years since Williams’ death, Newell has remembered him as a “kind young man, who never had a chip on his shoulder,” who was always smiling and heading outside on his latest adventure with his friends. The time following his death has been devastating for the community, especially for Williams’ family and his young friends in the local schools.

These days DeWitt said she feels “overwhelmed” by the support Riding with Jacob has received from people near and far. Though most donations have come from Aroostook County communities, there have been people with County connections as far away as San Francisco and Florida who have sent $500 gift cards towards the bicycle purchases.

When the time comes to give away those bicycles to children and teens, DeWitt is looking forward to seeing the smiles on their faces.

“I’m very appreciative of everybody who has helped us and happy that we’re able to keep Jacob’s memory alive,” DeWitt said. “He would have wanted other kids to be happy.”