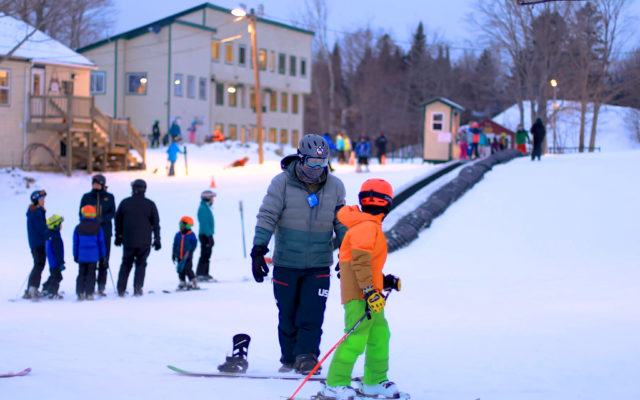 Melissa Lizotte • February 15, 2021
Between the pandemic and a decrease in the amount of seasonal snowfall, ski areas in central Aroostook have dealt more than ever with the need to adapt to the current situation and hope for the best.

PRESQUE ISLE, and MARS HILL, Maine — Between the pandemic and a decrease in the amount of seasonal snowfall, ski areas in central Aroostook have dealt more than ever with the need to adapt to the current situation and hope for the best.

Though the Mars Hill-based BigRock Ski Area originally planned to open in mid-December, too many of the 29 trails lacked the sufficient amount of snow and smooth skiing conditions necessary for people’s safety. Instead, BigRock began opening some trails after the New Year, causing the nonprofit to miss out on revenue from Christmas break, traditionally one of its strongest weeks.

BigRock’s inability to begin producing their own snow on time because of higher than normal temperatures also hampered its opening. Snow was being made in December instead of late November, delaying the season.

“You always want to have temperatures consistently 20 or below and low humidity,” said Aaron Damon, BigRock assistant general manager and marketing director. “It could be very cold out, but if you have humidity, that could cause problems with making snow.”

The late start to the ski season and closure of the U.S.-Canadian border has led BigRock staff members to expect a decrease in revenue this year. Damon estimates that Canadian visitors make up at least 30 percent of annual season pass holders.

At the same time, BigRock has seen an increase in both daily visitors and season pass buyers who are first-time skiers. They have also continued their annual after-school ski lessons outside of the public ski hours.

“The pandemic has definitely made people feel more isolated, especially in Maine where we already have long winters. People are trying more outdoor activities and it has become a good opportunity for first-timers,” Damon said.

To maintain social distancing, BigRock has allowed only 50 people in the lounge per floor and they can only take off masks when eating or drinking. People must also keep masks or face coverings on and maintain a six-foot distance at the base of the mountain and whenever they come across others on the trails.

Instead of crowds of people waiting inside, BigRock set up a ticket window that people visit upon arrival without leaving their vehicles. The rental shop allows only five people at a time and has just one door for entering and leaving.

“People can purchase their tickets and equipment and head to the ski lift without ever coming inside the building,” Damon said, about the ticket window. “It has a better flow of traffic overall and something we’re going to keep even after COVID.”

Currently all but two of Big Rock’s trails — North Star and Uncle Bud’s — are open for public skiing. Big Rock has also just opened their snow tubing hill for Saturday and Sunday regular hours — from noon to 4 p.m. — and will open the hill for those same hours during the school districts’ February break. 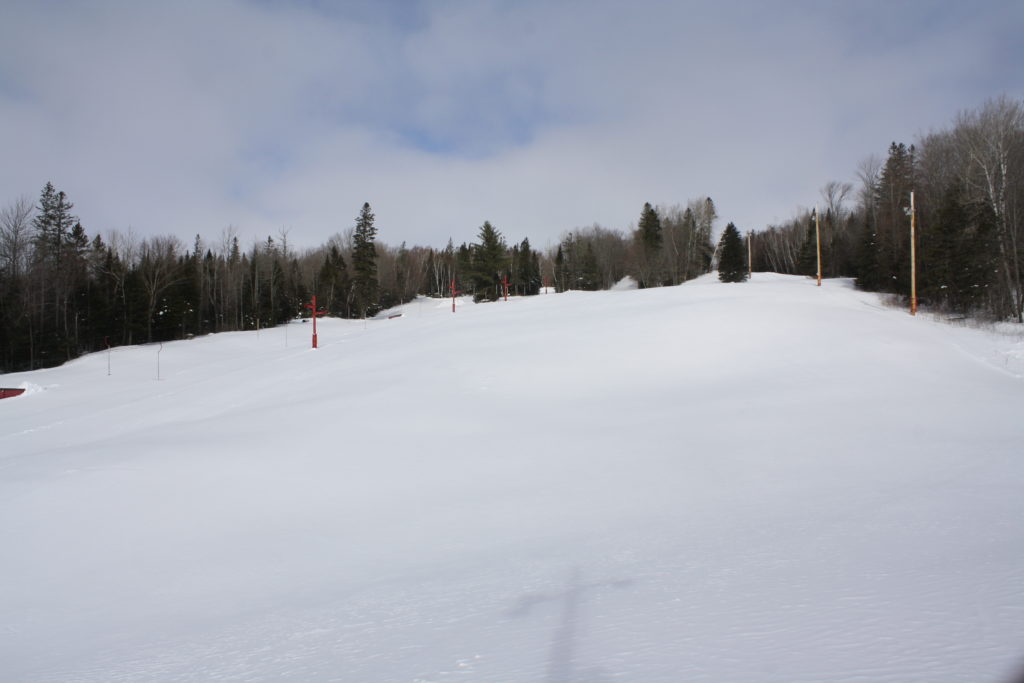 The terrain park at Quoggy Jo Ski Center has received approximately 12 to 18 inches of snow this season, much less than usual for the ski center. (Melissa Lizotte | The Star Herald)

At Quoggy Jo Ski Center in Presque Isle, president Chris Kilcollins and his group of around 30 volunteers have seen approximately 12 to 18 inches of snow so far this season, at least a half to a third less than normal for this time in the season. Instead of using large snowmaking machines, the nonprofit relies solely on natural snowfall for coverage of their downhill ski trails.

Although the current amount of snow provides enough coverage for skiing, the fate of the ski season at Quoggy Jo largely depends on local weather trends. Instead of starting in late December, the lesser amount of snow forced Quoggy Jo to open Jan. 31, losing revenue from the Christmas break and Martin Luther King Jr. Day.

“My concern is whether we’ll get more warm weather and precipitation that could impact the amount of snow coverage we have,” Kilcollins said.

To compensate for the late start, Quoggy Jo has begun offering night skiing on Wednesday and Saturday from 5 to 9 p.m. in addition to their normal 11 a.m. to 4 p.m. daily hours. Though there are no after-school programs at this time, volunteers are available for free ski lessons during regular hours for people interested in learning to ski.

In response to the pandemic, Quoggy Jo is limiting the ski rental and food lodge to 25 people at a time and has added an outdoor tent and firepit for anyone wishing to take a break from skiing outside. Masks or face coverings are required inside the lodge.

Though Quoggy Jo has seen decreased revenue due to the lost December and January ski hours and lack of Canadian customers, who make up 15 to 20 percent of season pass sales, the past few weeks have been filled with regular and first-time visitors, especially on the weekends.

“A good day for us usually means 125 skiers coming out, but lately we’ve been seeing numbers in the 150s and 160s,” Kilcollins said. “Last weekend we completely sold out of our adult ski rental equipment.”

Quoggy Jo has seen more new skiers requesting lessons and more families taking advantage of the extra time to be active outdoors due to the lack of indoor events during the pandemic, Kilcollins said.

“People have been tired of being indoors all the time, especially since there’s not many sports events to go to this year,” Kilcollins said.

At Nordic Heritage Center, located adjacent to Quoggy Jo, steering committee member Renee Fournier has also seen more families purchase yearly and day passes and come for a fun day of cross-country skiing, snowshoeing, fat bike riding or sliding. Due to the layout of the cross-country trails and the availability of large trail groomers, Nordic’s trails have been open since mid-December.

“Normally we might see people drop off their kids or hang out in the lodge while their kids are at lessons, but this year we’ve seen a lot more people coming as a family. It’s nice to see people taking advantage of that time together,” Fournier said.

Though Nordic’s lodge is closed due to pandemic restrictions, the Welcome Center is open on select days from 9 a.m. to 3 p.m. and their trails are open daily. Information can be found on their Facebook page.