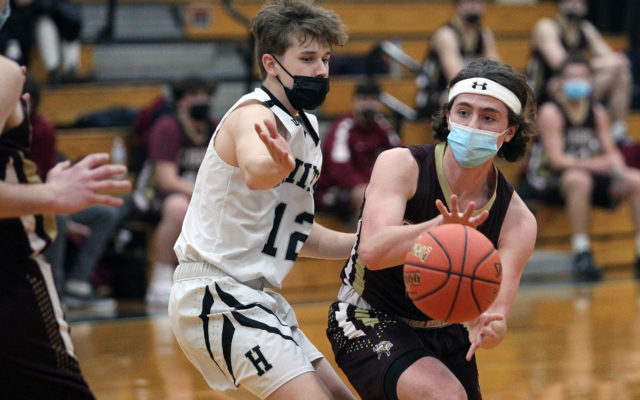 Chris Bouchard • February 22, 2021
The Caribou Viking boys basketball team is on track for another great season sporting a 9-0 record of Feb. 19.

CARIBOU, Maine — The Caribou Viking boys basketball team is on track for another great season sporting a 9-0 record of Feb. 19.

Caribou is the top-ranked team in boys Class B-C and should retain that ranking for the upcoming Aroostook County playoffs, slated to begin sometime next week. The regular season is tentatively scheduled to end Saturday, Feb. 27.

But while the wins are nice, Coach Kyle Corrigan said the team is mostly just happy to have an opportunity to play amid the uncertainties surrounding the pandemic.

“They are extremely grateful for any opportunity they’re given,” he said. “They get to practice as early as they can. We have rules for how early they can come here, and if I tell them it’s 10 minutes early they’ll be waiting by the door 11 minutes before practice. They’re excited to be there every day.”

And once practice ends, Corrigan the team usually wants to stay longer.

“They don’t want to leave the gym once they’re in it,” he said.

The team was off to a bit of a rough start, Corrigan said, as they had to play their first game with only two days of practice. Like other teams, they also play while wearing masks, which the coach said was a challenge at first.

“I get winded yelling instructions with a mask, so I can’t imagine what they go through running up and down the court,” he said. “We kinda weaned ourselves into it, but I think we’re in a good spot now. None of the guys are even asking for breaks anymore; it’s almost like second nature.”

More than the masks, Corrigan said uncertainties surrounding scheduling amid the pandemic has been the season’s greatest challenge.

“At any moment I could get a phone call saying ‘you guys are done,’” he said. “There are so many unknowns right now, but we don’t approach it thinking that we’re going to get shut down. We want the most opportunities we can have for the guys right now.”

There are currently 10 seniors on the team, and this year is their last chance to play high school basketball.

Of the teams they’ve played so far, Corrigan said Houlton was among their fiercest opponents.

“I think we won our first game against them by three points. They really battled with us. They’re a tough, hard-nosed team and they don’t stop working,” Corrigan said.

At this point, the particulars of the postseason are uncertain. Corrigan said nothing is set in stone, but they may have a combined tournament with Aroostook County’s Class B and C teams, and another tournament with Class D.

The coach said he’s never experienced anything like this season, where games are relatively silent without packed bleachers and cheering fans.

“I feel really bad for our senior parents,” he said. “This is their kids’ last chance to play basketball in high school, and they have to watch from home rather than be on the bleachers and gettin that atmosphere. It’s really tough; I wish there could be another way.”

He said at first he thought it was reminiscent of a summer league, but even those games have fans and parents in regular attendance.

“The gyms are quiet, and during half time you can hear what the other teams are saying. It’s a little eerie,” Corrigan said.

Overall, he said all the kids playing in Aroostook County have been doing a great job, considering the circumstances.

“I think the kids have absolutely made the most of the opportunity they’ve been given,” he said. “They’re working as hard as they possibly can, with the mindset that this could all end tomorrow.”