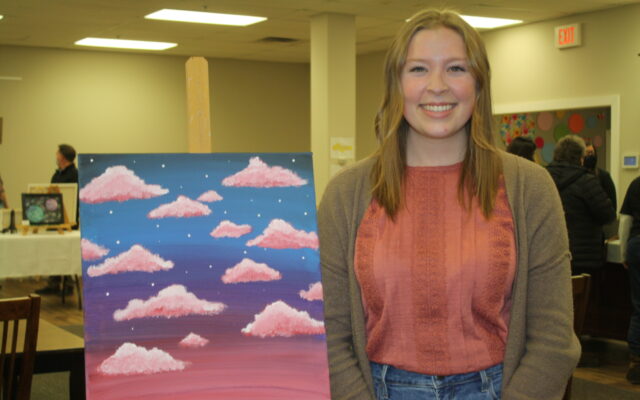 Melissa Lizotte • March 8, 2021
Wintergreen holds its first First Friday event in its new space at Aroostook Centre Mall. It is also the first public First Friday opening since the nonprofit reduced its event schedule during the pandemic

PRESQUE ISLE, Maine — Ever since Presque Isle native Alexandra Michaud began volunteering at Wintergreen Art Center’s First Friday Downtown Art Walk exhibitions, she knew that one day she wanted to be the featured artist of her own exhibition.

That goal became a reality on Friday, March 5, when Michaud showcased 27 of her acrylic paintings at Wintergreen during the nonprofit’s first First Friday event in its new space at Aroostook Centre Mall. The opening also served as Wintergreen’s first public First Friday opening since reducing its event schedule during the pandemic, and Michaud’s first-ever exhibition as an artist.

Michaud’s work features vibrant dark and bright colors that often allude to strong emotions of the people she depicts or feature a new perspective on familiar landscapes such as fields of winter snow and coastal shores. Though Michaud sometimes thinks of personal experiences while painting, she said that she most often draws from emotions. 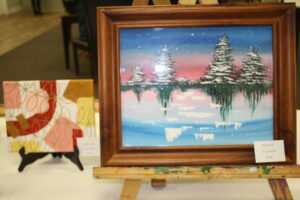 “Sometimes I just paint whatever I’m feeling. I like taking the emotions of human experiences and adding them into my work,” Michaud said.

On a personal level, Michaud sees art as a means to express her inner thoughts and feelings, especially throughout life’s most challenging moments.

“Art is a way for me to escape. It allows me to relax during the more busy times in my life,” Michaud said. “I think it’s important for everyone to have some type of coping mechanism.”

Michaud’s connections to Wintergreen run in the family. Her father, Carl Michaud, and mother, Kim Guerrette Michaud, are longtime Wintergreen volunteers and most recently served as board members.

While beaming with pride at her daughter’s artwork, Kim Guerrette Michaud said that Alex would often chat with Wintergreen’s featured artists while volunteering for First Friday events. She noted how much Alex’s art has grown in the five years that she has been actively painting.
“We’ve seen her paintings go from fun to insightful to being both fun and insightful,” she said. “When you look at her paintings of people, it’s like you’re looking at someone through her eyes.”

Carl Michaud also said he was glad to see his daughter pursue her love of art through dedication and hard work. 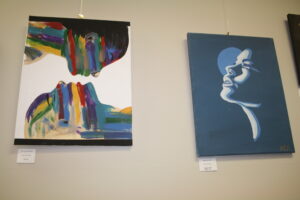 Paintings from Alexandra Michaud, “The Color Within” (left) and “Moon Vision,” on display at Wintergreen Arts Center. (Melissa Lizotte/The Star-Herald

“We’re very proud of her for continuing to try new things and become better and what she does,” he said.

Throughout the pandemic Wintergreen has held several virtual or family-only First Friday gatherings, but this is the first one they have opened to the public since the pandemic began.

Though the crowd of around 20 people consisted mostly of close family members and friends, Dottie Hutchins, Wintergreen executive director, sees upcoming First Friday events as one way for Wintergreen to slowly return to normal.

On April 2, local photographer and musician Janice Santos will display her work and perform, and on May 7 Presque Isle firefighter and paramedic Winston Reed will showcase his paintings. Both shows and future First Friday events will be open to the public, though Wintergreen will still require masks and social distancing and adhere to the state’s limitations for indoor gatherings.

“It’s nice to welcome people back. With more people getting the vaccine now, I think we’ll be able to have small First Friday events as we start to see things return to normal,” Hutchins said.