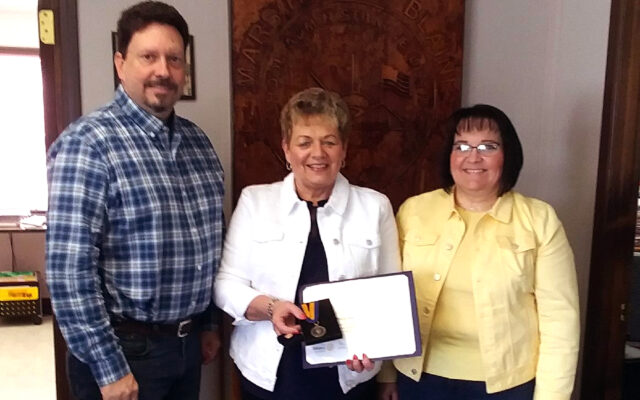 Miller has been a Mars Hill Rotarian since 2014. She became the club’s secretary in 2015 and continues in that office today.  She participates in many activities within Rotary including the club’s annual golf tournament, Samaritan’s Purse, Purple Pinkie, Mars Hill pageants, raffles, annual Car Hop Supper, annual turkey dinner, the popcorn concession and other activities within the Rotary 7810 District.

Miller is involved in many community programs, including the Mars Hill Food Cupboard, the Homecoming Committee and the Historical Committee, and is the choir director and church clerk for the Blaine Free Baptist Church. Kathy has been employed with SAD 42 for the past 26 years.

According to the Mars Hill club, she exemplifies Rotary’s motto, “Service above self.”

Rotary established the Paul Harris Fellow recognition in 1957 to encourage and show appreciation for substantial contributions to what was then the Foundation’s only program, Rotary Foundation Fellowships for Advanced Study, the precursor to Ambassadorial Scholarships.

The first Paul Harris Fellows included past Rotary International Director Allison G. Brush, who served during the 1937-38 Rotary year, and longtime Rotary International Treasurer Rufus F. Chapin, both for donations made in 1946. Mrs. Adan Vargas was the first woman to receive the recognition, for a gift made in 1953. Mrs. Harry L. Jones was the second, and one of only five people recognized for contributions actually made in that inaugural year.

Rotarians have a tradition of supporting the Foundation by honoring others. Ida LeTulle Taylor became a Paul Harris Fellow in 1978 when her husband, Vann Taylor, who was serving as a district governor, made a donation in her name in honor of their 34th wedding anniversary. The gift also made her the 25,000th Paul Harris Fellow.

There are more than 1 million Paul Harris Fellows.

Rep. Joseph Underwood, R-Presque Isle has been appointed to serve on the Legislature’s Agriculture, Conservation and Forestry Committee.
Pets END_OF_DOCUMENT_TOKEN_TO_BE_REPLACED