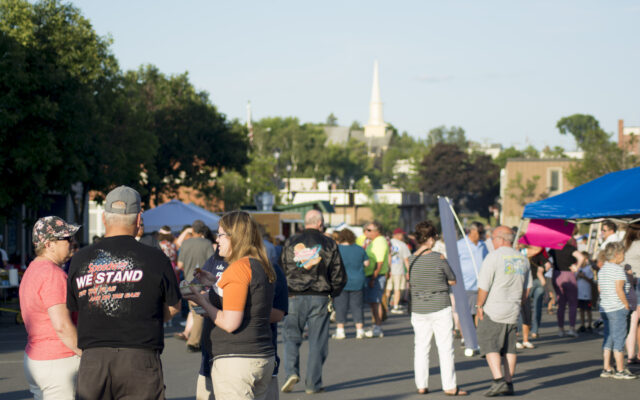 Chris Bouchard • May 11, 2021
The next “Thursdays on Sweden” event will be a concert held on the North Mall Parking Lot, adjacent to Sweden Street, a move made after city councilors criticized previous plans to hold an alternative event on Main Street.

CARIBOU, Maine — The next “Thursdays on Sweden” event will be a concert held on the North Mall Parking Lot, adjacent to Sweden Street, a move made after city councilors criticized previous plans to hold an alternative event on Main Street.

The first event is set for June 3, and will feature food trucks, an outdoor cafe and a performance from “Barefoot Brotherhood,” a group with a unique take on the jam band genre with songs reminiscent of Phish and The Grateful Dead.

Organizers will use this year’s kickoff to gauge attendance and determine a safe way to invite vendors to subsequent festivals.

Notice for each event in the series will occur on a date-by-date basis, as opposed to one lineup released earlier in the year, in order to keep up with rapidly changing COVID-19 guidelines and regulations.

Caribou Marketing and Events Coordinator Christina-Kane Gibson said she was optimistic that, with cases trending in a positive direction, the city could be back to their regular location with a full slate of vendors later this summer.

City officials, including the recreation department, public works and the police, had previously settled on holding the event at 20 Main Street at Northern Maine Brewing Company, a restaurant with a large outdoor space and stage area behind the building that could accommodate large crowds while still adhering to six-foot social distancing guidelines.

The event, dubbed “Thursdays on Main,” was advertised on social media and received close to 100 shares. But when the city council heard that the event would be moved from Sweden Street, where it had been held for more than half a decade, due to COVID restrictions, the posts had to be taken down and city officials were asked to reconsider its location.

During a May 3 meeting, Councilor Doug Morrell asked City Manager Dennis Marker if the city had contacted any other local businesses about holding the event on their property.

“We can’t offer that to one, and not to everybody,” he said. “That’s just not right.”

Marker said the reason for choosing the 20 Main Street business was that they had a large enough piece of property that could accommodate both large crowds and six-foot social distancing guidelines, adding that the city could reach out to any businesses with a similar amount of outdoor space.

Councilors Thomas Ayer and Morrell both criticized the decision to move the event because of social distancing guidelines, concluding that citizens are capable of making their own decisions amid the pandemic.

Councilor Lou Willey said that failing to follow the state recommendations would result in a loss of all federal funding amid the pandemic, and that the city’s schools in particular have received a sizable amount of funding just this year.

In late April, RSU 39 (Caribou and Stockholm) received $1.5 million in federal funding, and are currently applying for an additional $3.5 million.

Councilor Joan Theriault said that in late May the capacity for outdoor events will be moved to 100 percent, which should allow the city to hold the event on Sweden Street.

Kane-Gibson, who attended via Zoom, explained that while the capacity will be moved to 100 percent, the state would still require six-foot social distancing.

Ayer and Morrell were not satisfied with the explanation, and event organizers were later asked to bring the event back to Sweden Street.

“The Thursdays on Sweden Street organizers recognize that there are varied opinions and tolerance levels for the mask regulations we currently have to deal with,” Kane-Gibson said of the pushback at the council meeting. “Wearing a mask during our favorite social event isn’t ideal but until legal directives change we ask all attendees to please follow the mask prescriptions. Residents of the area love these events. They enhance our quality of life and sense of community. We invite everyone to come and enjoy the connection we feel when we are together as friends and neighbors. Try and remember that masks are only temporary.”

Kane-Gibson said Tuesday, May 10, that safety will be a top priority for the new event at the North Mall Parking Lot, and that the city will continue closely following the guidance of the Maine CDC and of local emergency services.

“Please help us by being compliant,” Caribou Police Chief Michael Gahagan also encouraged participants. “No one – even the actual police – wants the job of being the mask police.”

Caribou Parks and Recreation Superintendent Gary Marquis said that with COVID-19 guidelines constantly evolving, organizers will stay on top of any changes and modify events as necessary.

“Cooperate with event staff, bring your own chairs and come enjoy the fresh air and great music,” he said. “If you’re not comfortable being in a crowd, try finding a spot close-by to listen from the comfort of your vehicle.”

Updates to the upcoming event and subsequent events are available on the City of Caribou Facebook page and the city website — cariboumaine.org. Dates for upcoming “Thursdays” events this summer include June 3 and 17, July 1, 15 and 29, and Aug. 12 and 26.

Members of the Houlton Band of Maliseets will head to the ballot box in order to determine who will be elected as their new tribal chief.
Pets END_OF_DOCUMENT_TOKEN_TO_BE_REPLACED
4 days ago