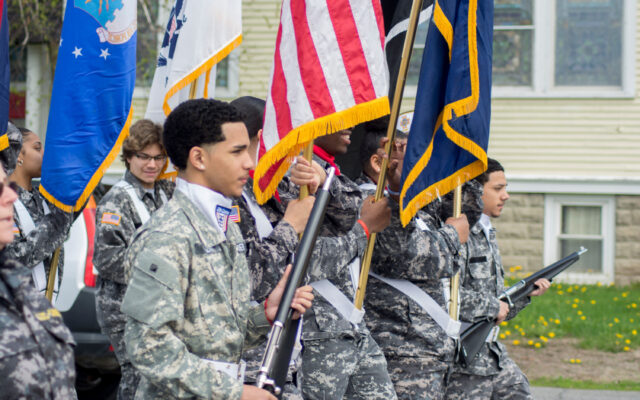 Paula Brewer • May 20, 2021
CARIBOU, Maine — Caribou’s Memorial Day Parade on May 31 will be the city’s first big community event since the pandemic resulted in lockdowns across the world last March.

CARIBOU, Maine — Caribou’s Memorial Day Parade on May 31 will be the city’s first big community event since the pandemic resulted in lockdowns across the world last March.

The event comes after Gov. Janet Mills announced on May 13 that requirements to physically distance outdoors and wear a mask will be lifted on May 24.

Earlier this month, Caribou Lister-Knowlton VFW Post 9319 Commander Roger Felix, Henry B. Pratt Jr. Post 15 American Legion Commander Cuppy Johndro, and Caribou Marketing and Events Coordinator Christina Kane-Gibson discussed how the event should be held — or if it should be held — just before the governor’s announcement.

“Later that day the governor made her announcement and we thought ‘All right, we’re doing it’,” Kane-Gibson said.

“It looked like it wasn’t going to happen because of the restrictions, but literally the minute those were lifted, [Kane-Gibson] has been instrumental in getting a hold of organizations and getting people involved,” Johndro said.

Prior to the announcement, Kane-Gibson said the main problem they faced was determining how they could realistically ensure that the crowds were socially distancing.

“We were talking about how it could be done in a parade setting,” she said. “It would be such a challenge and we don’t have the resources to have people go out there just to make sure everyone is socially distanced.”

Lineup will start at the Caribou courthouse on Sweden street at 9:15 a.m., with the parade itself starting at 10 a.m.. It will go from the courthouse up to Veterans Memorial Park on Main Street, next to the Nylander Museum where a ceremony will be held. Later that day, veterans will convene for an additional ceremony at the Northern Maine Veterans Cemetery on the Lombard Road.

Kane-Gibson said sign-up for the event is fairly informal, and any individuals or organizations who would like to participate can go to the courthouse during the line-up. She said that, from the city side, the police and fire departments are helping escort participants, but that the event would not be possible without the hard work of the local American Legion and VFW.

Felix said he is excited that the event will return without restrictions, as it was in 2019 and in previous years.

“It’s outstanding,” he said. “I think people are eager to get outside and hopefully the weather’s nice and people have a chance to come together, at least for a short time. The event is not very long, but it’s a chance for people to see each other besides just bumping into one another at Walmart.”

Johndro also said she was looking forward to not only the upcoming parade, but to the easing of restrictions helping out 501(c)3 organizations who depend on community events and gatherings for funding.

“All of those places used to set up and have barbecues and big events, they were hit by a loss of revenue, and hopefully these organizations will all be able to make a comeback,” she said. “I’m just looking forward to getting a nice crowd together to support the parade, and to show their pride in America, because now’s the time. Now, more than ever.”

“I think this parade has a dual meaning,” Felix said.” Besides honoring our fallen soldiers, it’s kind of a day to memorialize getting back to normal.”

Members of the Houlton Band of Maliseets will head to the ballot box in order to determine who will be elected as their new tribal chief.
Pets END_OF_DOCUMENT_TOKEN_TO_BE_REPLACED
5 days ago