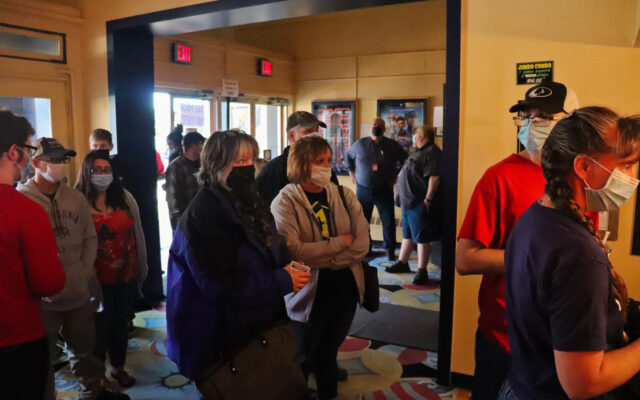 Alexander MacDougall • June 1, 2021
After months of closure due to the COVID-19 pandemic and lack of films being distributed for theaters, Houlton’s Temple Cinema looks to finally be returning to a sense of normalcy.

HOULTON, Maine — After months of closure due to the COVID-19 pandemic and lack of films being distributed for theaters, Houlton’s Temple Cinema looks to finally be returning to a sense of normalcy.

The theater reopened on Thursday, May 27, for the screening of the films “Cruella” and “A Quiet Place 2.” The theater’s snackbar was also open for selling refreshments such as popcorn and soft drinks. Masks were still required for those inside the theater.

The theater had tried reopening once before last September, with the screening of the film “Tenet”. But audiences weren’t so keen on the Christopher Nolan thriller, and the theater shut down again, doing only popcorn sales.

The turnout over the weekend was much better, theater owner Charlie Fortier said.

“We had the same amount of people opening day as we did the whole two weeks of “Tenet’,” Fortier said. “It’s not completely back to normal, but we were close.”

The films will air again for the following weekend before switching to two new yet-to-be-determined features. “Cruella” is the origin story of the famous Disney antagonist from “101 Dalmations”, while “A Quiet Place 2” is the sequel to the John Krasinski horror film from 2018.

Wednesdays will be free popcorn night for the theater, with popcorn included with every purchase of a movie ticket.

Members of the Houlton Band of Maliseets will head to the ballot box in order to determine who will be elected as their new tribal chief.
Pets END_OF_DOCUMENT_TOKEN_TO_BE_REPLACED
6 days ago