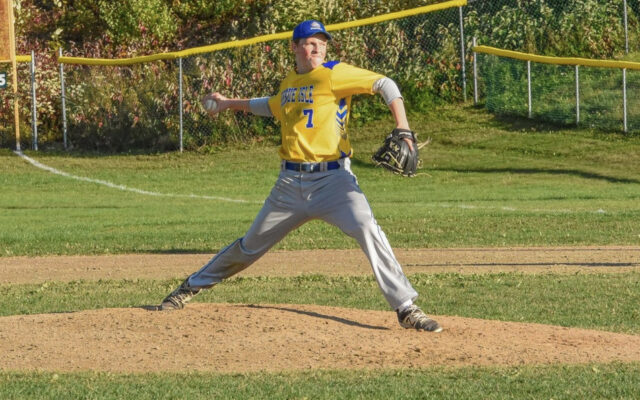 UMPI proves to be perfect fit for former Shire athlete

Joseph Cyr • July 19, 2021
For much of his young life, baseball has been the one sport above all others where Houlton’s Nick Perfitt has excelled.

PRESQUE ISLE, Maine — For much of his young life, baseball has been the one sport above all others where Houlton’s Nick Perfitt has excelled.

A 2018 graduate of Houlton Middle-High School, Perfitt was a three-sport athlete for the Shires, but it was his love for baseball that drove him to achieve greater success at the collegiate level. The talented 21-year-old athlete just finished his junior year of college at the University of Maine at Presque Isle, where he is pursuing a degree in business accounting.

Perfitt hit his stride on the diamond during his junior year with the Owls earning the prestigious 2020-21 Male Breakthrough Athlete of the Year Award for his efforts.

“I was pretty excited to learn that the people who chose the award felt I was deserving,” Perfitt said.

In his junior year, Perfitt started all 18 games for the Owls, leading the team in home runs (one), Runs Batted In (11) and stolen bases (four). He was also second on the team in batting average (.283). Perhaps even more impressive were his skills on the pitching mound as he led the Owls in Earned Run Average (7.50) and strikeouts (20) as well as tallying a win in the team’s final game May 10 at Farmington.

“Nick is a great asset to our program,” UMPI baseball coach Roger Stinson said. “I recruited him hard as a senior in high school, but it took us an extra year to get him in an Owls Uniform.”

Perfitt spent his freshman year at Husson College in Bangor before deciding to transfer to UMPI for his sophomore year. Unfortunately, COVID-19 took away his sophomore season as sports were canceled at the school. His junior year also featured a shortened season.

“Nick is a leader on and off the field and classroom for us,” Stinson said. “He worked hard during  our shortened COVID season to be the guy to turn to when we needed the little things. Our record definitely does not reflect what Nick brings to our team. He is a leader, a very quiet young man who is finally coming out of his shell.”

Making the transition from high school to college athletics was challenging at first, Perfitt said.

He credits his parents, Ervin and Paula Perfitt of Houlton, and his grandparents Chris and Wayne Lee for much of his success.

“My grandfather taught me a lot about how to pitch properly and my parents were always huge supporters, taking me to sporting events around the state,” he said.

Stinson said Perfitt earned the starting nod in the team’s final game of the season, and came through with aces as he pitched a complete game to give the Owls their only win on the season, 7-3 over University of Maine at Farmington.

“The guys on our team look up to him and will follow him into battle. Him and I have had a running joke all preseason on him being the lead-off hitter but also being the RBI leader,” Stinson said. “Well, in the end of our shortened season you will see he is a leader on our team.”

Perfitt played a major part in the team’s pitching rotation, but he also saw extensive time in the field, which was something he desired.

“I had slated him in my mind as our starting second baseman, but in the end he moved to third when not on the mound,” Stinson said. “Nick’s success at UMPI will be like some others we have here, because he is a student/athlete who does things right. He is here to get an education and to enjoy the game he loves. He leaves everything on the field and will do whatever is asked of him. He is a player every coach wants to coach.”

Forbidden foods for our four-legged friends are many and can be very dangerous if ingested. Sometimes, we give our pets leftovers or what we consider treats. According to many sources, some human foods can make an animal very sick, and in certain cases can even be lethal.
What's Happening This Week END_OF_DOCUMENT_TOKEN_TO_BE_REPLACED