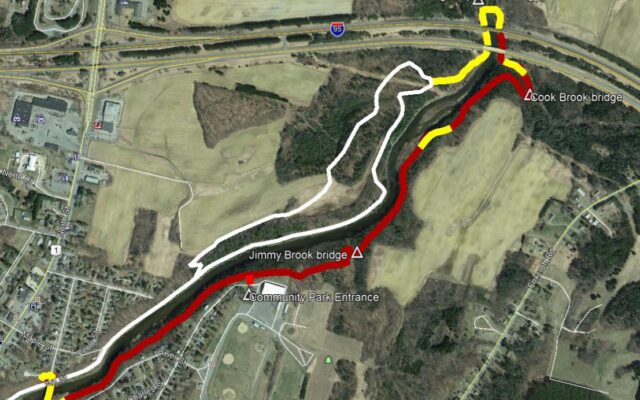 Houlton’s Riverfront Trail to be expanded

Joseph Cyr • July 23, 2021
Houlton’s Riverfront Park hiking trail will be doubling in size thanks to the efforts of a passionate volunteer group.

HOULTON, Maine — Houlton’s Riverfront Park hiking trail will be doubling in size thanks to the efforts of a passionate volunteer group.

Members of the Houlton Planning Board Tuesday, July 20, approved a shoreland zoning application from Gary Hagan to construct a 1.7-mile trail extension on the easterly side of the Meduxnekeag River. Once complete, it will connect with the existing Riverfront Trail, creating a nearly 5-mile path for hikers on both sides of the river.

The current Riverfront Park trail begins at the park near the Gateway Crossing Bridge and continues along the westerly side of the Meduxnekeag River almost to Interstate 95, before looping back.

“What we are talking about is an extension of the current trail that will go from the north end of the trail, under the two I-95 bridges, and across the river via the suspension bridge,” Hagan explained. “It will then go along Cooks Brook and back along the river to Highland Avenue. Some sections of the trail are already there in rough form.”

The trail will be 5.5 feet wide and 25 feet from the water. Some portions of the new trail will be very steep and only wide enough for one person, Hagan explained. Tree removal will be kept to a minimum to preserve the natural beauty of the area, he added.

Footbridges will need to be constructed over Cooks Brook and Jimmy Brook for hikers. No portion of the trail will be open to motorized vehicles such as ATVs or UTVs, he said.

Board member Priscilla Monroe expressed a safety concern about hikers using the 250-foot ATV bridge, located behind the Irving Big Stop, as a footpath over the river.

“Would it be too expensive to build a separate bridge to avoid using the one the ATVs use?” she asked. “There is no room for people to get out of the way (of an ATV).”

Hagan said that creating a new bridge over the Meduxnekeag River was not financially feasible.

“That bridge was created for both ATVs and hikers,” he added. “If you are on foot you can easily hear snow sleds and ATVs coming.” 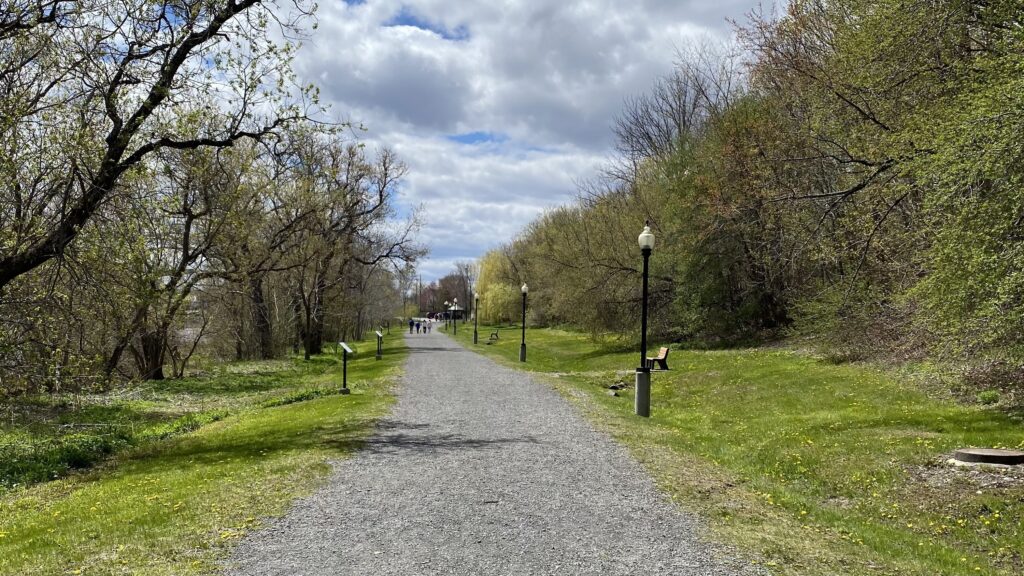 The Houlton Town Council was first apprised of the trail extension back on May 11, with the board enthusiastically supporting the idea.

Tuesday’s public hearing with the Planning Board, however, was not met with the same enthusiasm as two property owners expressed their concerns with the project.

Charles Taylor, who resides at 58 Elm St., expressed misgivings about people walking through his property to either enter or exit the trail, and also had concerns with who would maintain the trail, erosion control and parking.

“We bought the property because it overlooked the river and it was scenic,” Taylor said. “We are afraid about what happens to our resale value. There are too many things left unanswered on this (project).”

Hagan stated the trail path was adjusted so that it would not be on Taylor’s property and enforcement of parking concerns would need to be addressed by the Houlton Police Department.

Steve Ward, who resides at 52 Elm St., echoed many of Taylor’s points and said several of his neighbors also had reservations.

“We have some major concerns that we will see increased traffic,” Ward said. “Some neighbors are also worried about their kids playing in the back yard with a trail going through.”

Jane Torres, a member of the Planning Board, stated there had not been any problems with loitering or all-terrain vehicle use on the current trail on the opposite side of the river.

“People seem to be very respectful,” she said. “Nobody is cutting through other people’s properties.”

Signs denoting access points to the trail will be erected at the Highland Avenue public boat landing and also at the John A. Millar Civic Center. Additionally signs for no parking and no ATVs are also being considered.

The original trail was unveiled in July 2019 to much fanfare with a ribbon-cutting ceremony. Thanks to the Aaron and Maria Putnam Charitable Trust, land for the trail has been donated and the members of the trust did the bulk of the ground work to create the walking trail. The trail property is owned by the town and the Aaron and Maria Putnam Charitable Trust and is open to the public free of charge.

The bulk of that trailwork was completed by Paul Callnan, Hagan and Gary Severson, who embraced a vision of creating a use for the land owned by the Putnam family.

Hagan said work on the trail would begin once all of the needed permits were obtained.

“I can’t wait to get going,” Hagan said. “I’ll start the day after getting MDOT permission for the section of trail that will go under the I-95 bridges that span the river. I first contacted them on March 31 and still have no idea how long their approval will take. Construction will take two or three years.”

Forbidden foods for our four-legged friends are many and can be very dangerous if ingested. Sometimes, we give our pets leftovers or what we consider treats. According to many sources, some human foods can make an animal very sick, and in certain cases can even be lethal.
What's Happening This Week END_OF_DOCUMENT_TOKEN_TO_BE_REPLACED