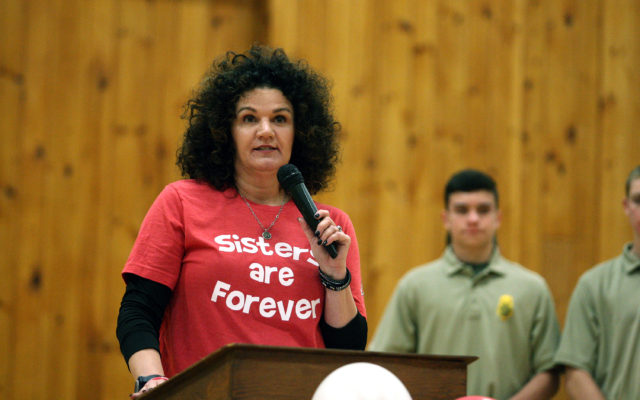 Joseph Cyr • August 17, 2021
Houlton native Nicole Hutchinson can hardly believe it has been 25 years since her baby sister’s life was cut short by a drunk driver.

HOULTON, Maine — Houlton native Nicole Hutchinson can hardly believe it has been 25 years since her baby sister’s life was cut short by a drunk driver.

But it is events like this Saturday’s fifth annual Maine Walk Like M.A.D.D. 5K race and walk in Houlton that help keep the memory of Darcie Hutchinson alive, while also fighting to make a difference.

The fifth annual Maine Walk Like M.A.D.D. 5K road race and walk takes place at 8:30 a.m. Saturday at the Gentle Memorial Building. Last year, the event was not held due to COVID-19.

Darcie Hutchinson was a graduate of Houlton High School’s Class of 1993. In 1996, at 21, she was killed in Connecticut by a habitual drunk driver who was a three-time offender. That person was sentenced to 10 years in prison, with five years suspended.

Nicole Hutchinson, a Houlton graduate in 1988 who resides in Raleigh, South Carolina, is returning to her hometown to honor the memory of her sister, and countless others whose lives have been affected by drunk driving, by organizing Maine’s Walk Like MADD event.

As the president of the Maine Chapter of Mothers Against Drunk Drivers, Hutchinson has made it her mission to educate people about the cause and is always overwhelmed to return home for this event. She is also on the national board, serving as chairwoman of the Missions and Field Delivery committee.

“We have an amazing community and our sponsors have come out in full force this year after not having the walk last year,” she said. “Our registration numbers are about the same, but we are hoping to see a good turnout on walk day. Several people sign up on the day of the event which is perfectly fine, and we will love to have them join us.”

From 2010 to 2015, an unofficial memorial walk was held each spring to celebrate Darcie Hutchinson thanks to the vigorous efforts of a classmate, Heather Campbell.

All of the funds raised from the walk will remain in Maine, with the money used to educate youths and parents about the consequences of drinking and driving, and to provide volunteer training to support the M.A.D.D. mission.

Some of the money also will go toward working with state and local legislators to adopt tougher laws, including requiring ignition interlocks for all OUI offenders, and to close loopholes in many existing laws.

For this year’s event, Mary Jane Cleary will be the guest speaker. Cleary’s mother, Ella Mae Grant, was killed by a drunk driver on Jan. 19, 1990. The State Police Impairment Driving Reduction Enforcement vehicle is scheduled to appear.

For the first time since 2019, there is competition for open seats on the Houlton Town Council
Pets END_OF_DOCUMENT_TOKEN_TO_BE_REPLACED

All of us at the Central Aroostook Humane Society hope that you had a wonderful and safe Thanksgiving holiday.  One change in shelter hours: just for the month of December, we will be closed Thursdays for training purposes.
What's Happening This Week END_OF_DOCUMENT_TOKEN_TO_BE_REPLACED