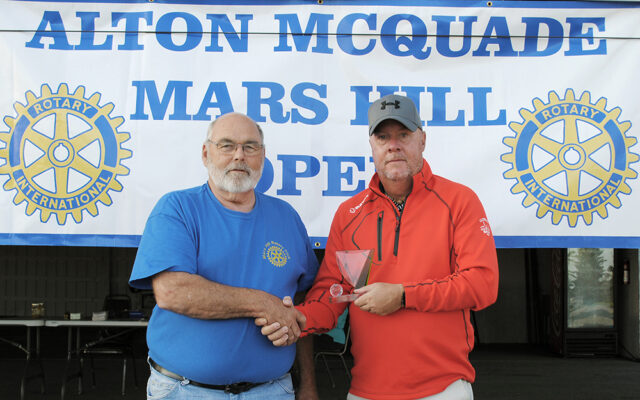 Contributed • September 27, 2021
The 19th Annual Alton McQuade Mars Hill Open was held Saturday and Sunday, Aug. 14 and 15, at the Mars Hill Country Club.  This event was sponsored by the Mars Hill Rotary Club.

More than 100 players enjoyed the warm weather and beautiful scenery as they went around the course, renewing or making new friends even if they had to social distance.  Saturday’s play was delayed periodically due to rain, but the players continued to complete the course after the showers ended.

The Mars Hill Rotary Club acknowledged the efforts of the Mars Hill Country Club staff in preparing the course and assisting with the scoring. Rotary also extended heartfelt appreciation to Harry Orser for his efforts to organize the tournament and provide assistance during the event.

When the tournament ended, there was a tie for the winner, and after a one-hole playoff, Ralph Michaud of Presque Isle was named the overall winner.

The following golfers won in their division:

The Rotary Club thanked all who came to raise money for the many different projects they sponsor, which include the Mars Hill Food Cupboard, Aroostook House of Comfort, Project Graduation, Meals on Wheels and scholarships for graduates.

Members of the Houlton Band of Maliseets will head to the ballot box in order to determine who will be elected as their new tribal chief.
Pets END_OF_DOCUMENT_TOKEN_TO_BE_REPLACED