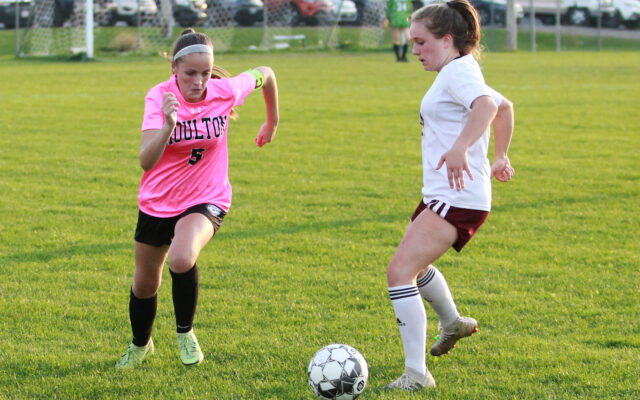 Joseph Cyr • October 29, 2021
The No. 5 Houlton girls soccer team came up just short in its quest to pull off an upset in the Class C North quarterfinals Wednesday, Oct. 27.

EAST CORINTH, Maine — The No. 5 Houlton girls soccer team came up just short in its quest to pull off an upset in the Class C North quarterfinals Wednesday, Oct. 27.

Samantha Johnson scored the lone goal for the Shires off an assist from Olivia Henderson. Central’s goal scorers were not immediately available.

For Houlton, it was a rollercoaster of a season as the team had several games wiped out when school switched to a remote learning model. The Shires also played its preliminary and quarterfinal playoffs without the services of their coach, Marina Cameron, who was in quarantine for the second time due to a COVID-19 exposure.

“This was definitely a season of ups and downs having to deal with injuries and COVID related things thrown our way,” Cameron said. “I couldn’t have asked for a better group of girls this season. They stayed positive when situations happened that were out of their control.”

She said when the school switched to a remote learning model, the team lost out on two weeks of games and practices, but remained positive.

“They kept a positive mindset and worked hard to stay conditioned during those two weeks off,” the coach said. “Being out in quarantine twice this season was not a part of my plan, but again the girls handled the situations as best as possible.”

“The ending of our season wasn’t what we were hoping for with me and a teammate having to be away, but the girls stepped up and found their reason to play, and truly gave their all against a good Central team,” Cameron said. “We had a great group of seniors who led this team and I am very sad to see them go, but excited to see what they do in the future. And for the returning players I look forward to another great season with a good group of girls to come.”

For the first time since 2019, there is competition for open seats on the Houlton Town Council
Pets END_OF_DOCUMENT_TOKEN_TO_BE_REPLACED