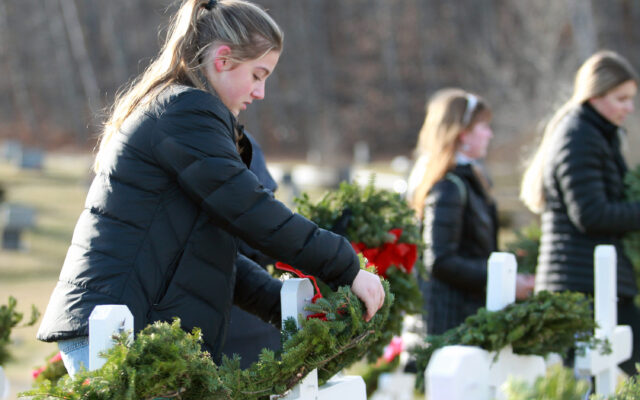 Joseph Cyr • December 20, 2021
A small group of about 20 people turned out Saturday afternoon to pay respects to the soldiers interred at Houlton’s Evergreen Cemetery by placing wreaths on their graves.

HOULTON, Maine — A small group of about 20 people turned out Saturday afternoon to pay respects to the soldiers interred at Houlton’s Evergreen Cemetery by placing wreaths on their graves.

The Houlton cemetery was one of more than 3,100 participating locations across the country. Similar ceremonies took place in Mars Hill and Caribou.

Students from Houlton Middle-High School wrote biographies for those soldiers who are buried on Soldier’s Hill. A few students, as well as members of the Houlton Police Department, Maine State Police, Aroostook County Sheriff’s Office, the American Legion and local veterans participated in the event.

Wreaths were placed on the crosses bearing the names of local soldiers who were killed in action. The event marks the first year that Houlton was invited to participate in the national event.

“For the people who are able to be with us here today in person, and especially to our Gold Star families, we are grateful that you are able to join us,” said Heather Mitchell, a teacher at HMHS. “We ask that to start the event, you all please join with me in a moment of silence to remember the fallen, prisoners of war, those missing in action, and honor those who have served and are serving this great nation’s armed services.”

Assistant Principal DeWayne Morse, an Air Force veteran, served as master of ceremonies for the event.

“Lying here before us and in cemeteries throughout this nation are men and women who gave their lives so that we can live in freedom without fear,” Morse said. “We can worship as we see fit. We can raise our children to believe as we do. We are free to vote for leaders of our choosing. And, we have the right to succeed and we have the right to fail at whatever endeavor we wish to pursue.”

Teacher Kristin Supa announced special wreaths to be placed for each branch of the Armed Forces, as well as a wreath for those who were Missing in Action or Prisoners of War.

“We encourage every volunteer here today, who places a wreath on a veteran’s grave, to say that veteran’s name aloud and take a moment to thank them for their service to our country,” Supa said. “It’s a small act that goes a long way toward keeping the memory of our veterans alive.

“Remember, we are not here today to ‘decorate graves.’ We are here to remember not their deaths, but their lives. Each wreath is a gift of appreciation from a grateful America,” Supa said.

National Wreaths Across America Day is a free, non-political, community event open to all people. Its theme is Remember, Honor, and Teach. Wreaths Across America is the non-profit organization best known for placing veterans’ wreaths on the headstones of the nation’s fallen at Arlington National Cemetery. The organization, in total, places more than 1.7 million sponsored wreaths at 2,557 participating locations nationwide and offers other programs throughout the calendar year.

“We are forever grateful for the thousands of supporters who dedicate their time and effort to fulfilling our mission on a local level,” said Karen Worcester, executive director, Wreaths Across America. “These individuals and their communities know the value of remembering the fallen, honoring those who currently serve and teaching the next generation about the sacrifices made for our freedom every day, and without their continued support, Wreaths Across America would not exist.”

The goal for Evergreen Cemetery was to raise enough funds to place 70 veterans’ wreaths on the headstones of all the local heroes laid to rest on Soldier’s Hill, to ensure that the individuals who served to protect the country’s freedoms are never forgotten and to bring the community together in patriotic commemoration. 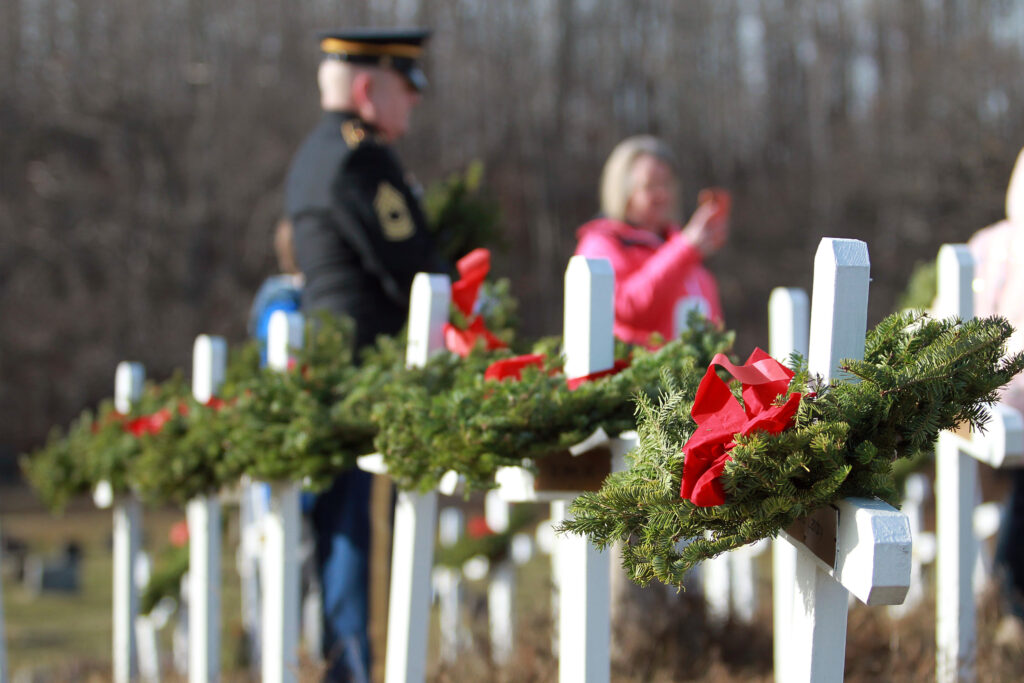 HOULTON, Maine — December 18, 2021 — The graves of soldiers killed in action at Soldier’s Hill in Houlton were decorated with wreaths Saturday as part of the Wreaths Across America event. (Joseph Cyr | Houlton Pioneer Times) 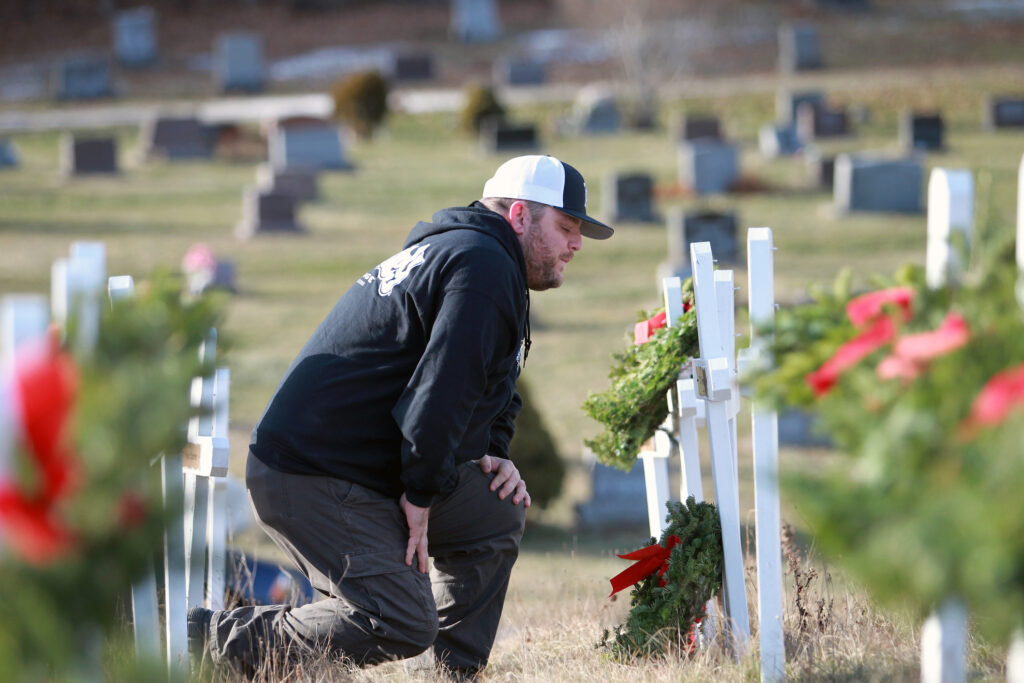 HOULTON, Maine — December 18, 2021 — Michael Dobbs kneels at one of the graves of a slain soldier after placing a wreath Saturday at Evergreen Cemetery in Houlton.  (Joseph Cyr | Houlton Pioneer Times)

For the first time since 2019, there is competition for open seats on the Houlton Town Council
Pets END_OF_DOCUMENT_TOKEN_TO_BE_REPLACED

One week ago we took in these two kittens and their mom who were considered barn cats and pretty much left to their own devices. With the cold weather temperatures and no food mom took her babies to the neighbors who took it upon themselves to get them to a safe place.

Every year thousands of unwanted pets are returned, given away or abandoned to their fates. Some of these pets were gifts for birthdays, Christmas or other occasions.  We have shared this information in the past, but we feel it is worth repeating.

ave you ever been around your dog and wondered what she is thinking or feeling?  Surely you have caught your canine doing something bizarre that has made you question his or her mental status.  Even the position that your dog sleeps in means something.
What's Happening This Week END_OF_DOCUMENT_TOKEN_TO_BE_REPLACED

Check out what's happening this week in the central/southern Aroostook County area.