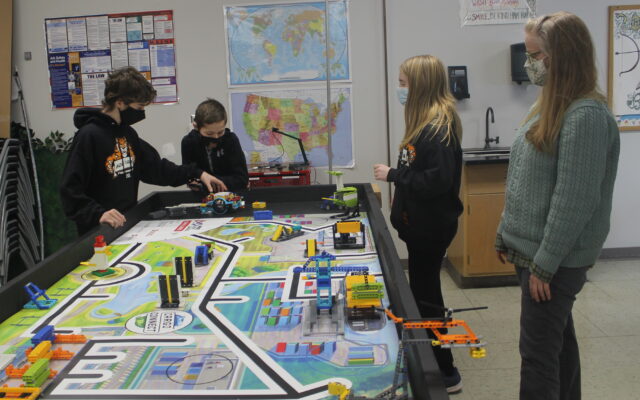 David DiMinno • January 20, 2022
The Fort Fairfield RoboTigers participated in a virtual robotics competition on Dec. 18, tasked with creating a robot made out of Legos, and coding it to accomplish specific tasks.

FORT FAIRFIELD, Maine — The Fort Fairfield middle school robotics team walked away from the December Lego League competition with an award for design.

The Fort Fairfield RoboTigers participated in a virtual robotics competition on Dec. 18. The team was tasked with creating a robot made out of Legos, and coding it to accomplish specific tasks, like pushing and pulling objects, and knocking other objects over. The more objectives a robot completes, the more points the team earns.

In order for a school to be eligible to win an award, it must perform admirably in all aspects of the competition, ranging from teamwork, overall robot design, how many objectives the robot completes and the quality of the presentation the team gives. Fort Fairfield’s presentation, performance and overall work netted it the award for best robot design.

The RoboTigers consist of six members in grades 7-8, with a high school student adviser, Renee Felini, who started the team seven years ago. Last year, the team had to be on hiatus due to COVID-19. However, when the competitions got moved into virtual Zoom format in 2021, Felini brought the team back. 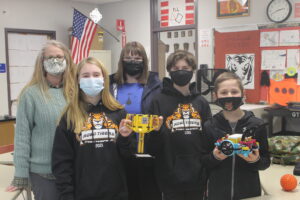 “This year, they scored the highest that we have ever scored for robotics,” said high school mentor Marissa Giberson.

The team was also responsible for creating a presentation for an invention that could better help the community. The team came up with the idea for a sensor that would go into potato trucks in The County to help prevent potatoes from falling out of the truck.

“Potato trucks can be filled in about eight minutes,” said Ainsworth. “They can easily be overfilled and more potatoes fall out. We designed a sensor that has a refresh rate of five Hertz, so it can sense a static obstacle in the beam’s path, and the harvester can tell when the beam is interrupted.”

The team spent several weeks programming, designing and testing their robot. Felini is proud of the team’s work, and supports her students in their pursuits in robotics.

“One of the great things about this curriculum is that students get to work together,” Felini said. “It’s like a science fair, where they come up with an innovative project and create something new. They have really come together to build a community within the school setting that they are a part of. “

A familiar face to Aroostook County residents has announced her candidacy for the Maine State Senate.
Pets END_OF_DOCUMENT_TOKEN_TO_BE_REPLACED

When 14-year-old Isaiah Belyea of Caribou began volunteering for Halfway Home Pet Rescue three years ago, he never imagined that his love for animals would quickly turn into a budding career.
What's Happening This Week END_OF_DOCUMENT_TOKEN_TO_BE_REPLACED