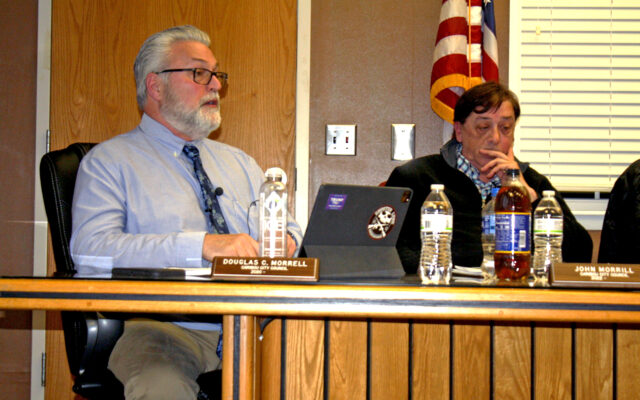 Melissa Lizotte • March 1, 2022
Even after approving a ballot referendum question to present to voters in June, the Caribou City Council remains divided over whether spending $10 million for a new police station is a good idea.

CARIBOU, Maine — Even after approving a ballot referendum question to present to voters in June, the Caribou City Council remains divided over whether spending $10 million for a new police station is a good idea.

While Caribou has been researching potential designs for a new police station since 2017, most recent efforts have involved getting a sense of residents’ opinions on the proposed design and costs from the Bangor-based company Artifex.

Documents prepared by Artifex claim that most of the costs are associated with electrical work and adding more modern policing features, such as ballistic protection. The design could include a basement that would give more upstairs space for jail cells, a larger interview room and evidence processing, spaces that Police Chief Michael Gahagan has said are lacking in the current station.

The city originally held a non-binding survey during the November election to better grasp the community’s opinions on a new police station.

That question stated: Do you favor borrowing money to provide an amount not to exceed $10 million to pay costs of expenditures for the construction and equipping of a new police station for the City of Caribou provided that the money is authorized by Caribou City Council and a referendum approved as specified in the Charter?”

Boma noted that the June referendum will contain the same language as November’s non-binding question.

“All we’re asking now is to formally get the pulse of the community. It’s not to say that we’ll actually spend the $10 million,” Boma said.

According to the city’s charter, capital improvement projects costing $500,000 or more of municipal funds must be submitted to voters through a referendum. The charter defines capital projects as complete lists of expenses for a new building, vehicle or machinery purchases, providing a service or a combination of those projects.

“It always goes back to $10 million. We haven’t done anything different from the beginning,” Goughan said. “We already got the community’s pulse. They gave you permission to hire an architect to get some real numbers.”

All documents concerning the police station design and study, which dates back to 2017, are available on the city’s website, stated City Manager Penny Thompson.

Morrell remained unconvinced that any design by Artifex accurately reflected what the city and taxpayers could or should spend on a new police station.

“We cannot afford a $10 million station. It just can’t be done. Other options have not been allowed to come to the table,” Morrell said. “Let’s face it; this is an albatross around peoples’ necks. Our children and grandchildren are going to be paying for this [station].”

Theriault stated that the committee and Artifex explored at least four other options, involving renovations to the current police station, which dates back to 1940. But structural issues would make such renovations more costly.

“The [final] figure we have will not exceed $10 million. There are grants that could mean we won’t come close to that amount,” Theriault said. “We need to get going on this. [The police department] needs a place to operate from. Let’s leave it up to the people.”

Forbidden foods for our four-legged friends are many and can be very dangerous if ingested. Sometimes, we give our pets leftovers or what we consider treats. According to many sources, some human foods can make an animal very sick, and in certain cases can even be lethal.
What's Happening This Week END_OF_DOCUMENT_TOKEN_TO_BE_REPLACED