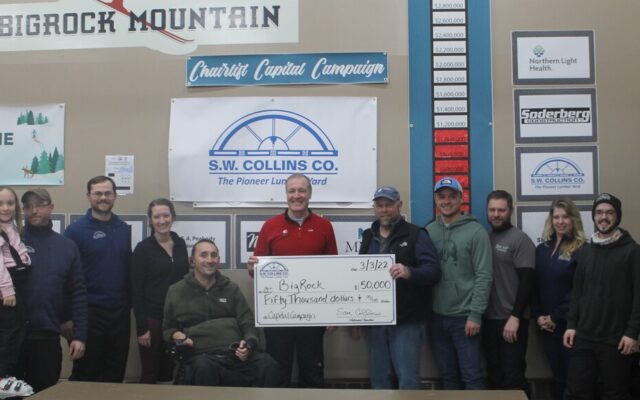 David DiMinno • March 8, 2022
Big Rock Mountain is well on its way to achieving its funding goals for its new quad chairlift.

MARS HILL, Maine — Big Rock Mountain is well on its way to achieving its funding goals for its new quad chairlift.

S.W. Collins Co. presented Big Rock Mountain with a check for $50,000 on March 3 to go toward the mountain’s capital funding campaign.

With this donation, the mountain currently sits at approximately $1.2 million raised for the project — not quite half of the goal of $2.9 million.

Big Rock mountain began its capital campaign in December in order to raise money to replace its double lift that goes to the top of the mountain, with a quad lift capable of carrying double the number of people at a faster speed. This will allow for a greater traffic on the mountain, and get more visitors on the hill faster.

The goal of the project is the Alpenstar Quad lift, a four-seater that will be 3,495 feet long, with a vertical rise of 929.05 feet. The ride to the top of the mountain will take approximately 8 minutes.

The current double ski lift was originally built in 1969, and began its use at Big Rock in 1993. Since then, the lift has begun to show its age, prompting Big Rock to plan for the future and launch the fundraising campaign.

S.W Collins owner Sam Collins was more than happy to contribute the money, saying that the mountain is a great northern Maine attraction that should be invested in.

“Big Rock Mountain has been important to Aroostook County for generations,” Collins said. “It’s an attraction for families and businesses, and we consider it to be an important asset that needs to be invested in for the benefit of all of Aroostook County.”

“The plan is to continue engaging businesses, individuals and foundations, to have them commit to help continue skiing in northern Maine,” Chasse said. “We are picking up momentum, and the whole fundraising campaign is very pleased with where we are right now.”

With the end goal of $2.9 million in sight, Big Rock is hoping to reach out to larger foundations over the next couple of months in order to keep the campaign’s momentum going.

Recently we took in a cat named Joe. He is a very sweet cat with a multitude of problems. He was rescued from the streets here in town, but Joe turned out to be a very sick kitty and was surrendered to The Ark because the resources were not there to help him.
What's Happening This Week END_OF_DOCUMENT_TOKEN_TO_BE_REPLACED