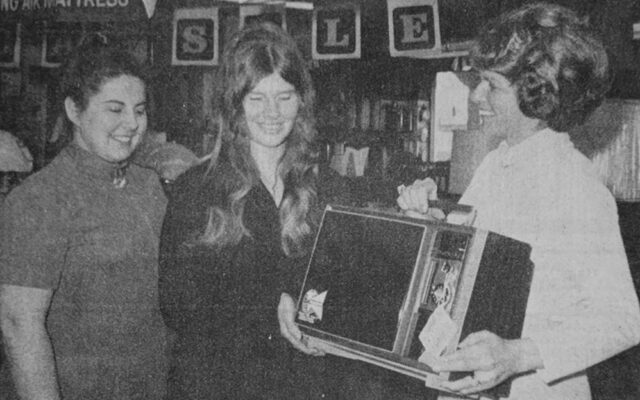 150th noted by Society— The Maine Historical Society celebrated its 150th anniversary April 22 at a special meeting held at the First Parish Church in Portland. It was in Portland that the society held its first meeting April 11, 1822. Over 250 members and guests from all parts of the state attended the observance, which included a reception at the Wadsworth-Longfellow House and a special exhibit in the society’s library at 485 Congress Street. Dr. Clifford K. Shipton, director emeritus of the American Antiquarian Society was guest speaker for the occasion. Roger B. Ray of Cape Elizabeth, president of the society, introduced the speaker and took the opportunity to announce the appointment of a 150th Anniversary Fund Committee to raise funds for enlarging the capacity of the society’s library by one-third. Miss Elizabeth Ring of Portland, vice president of the society, was named Chairman of the committee.

Initiated into PSI Chapter — Dana J. Hunter Jr. of Presque Isle, was initiated into the Psi Chapter of Rho Chi Honor Society, Massachusetts College of Pharmacy, at the annual banquet April 11. The Rho Chi Society was established in 1908 as a local honor society in the College of Pharmacy of the University of Michigan. In 1922, the society became a national organization with chapters in most of the 76 colleges of pharmacy in the United States. Membership is restricted to upper classmen of outstanding scholarship.

R. Soucier was named to a new position — John H. Miles, manager of Suburban Propane’s Presque Isle district office, announced the promotion of Richard Soucier to the position of service manager. Soucier had been employed and affiliated with Suburban Propane and their dealer organization for the previous thirteen years. Before his promotion to service manager, Soucier was involved with delivery, service, both retail and industrial sales, and was an employee in charge of a satellite operation in the Island Falls area. A lifelong resident of Aroostook County and born at Presque Isle, he resided in Washburn, married with two sons.

United Way collected $260,157 — United Way of Aroostook raised a record-breaking $260,157 for the 1996-97 campaign. At the annual meeting and awards presentation, dozens of County businesses were recognized for their efforts in increasing giving. Alan Dunn of Fort Fairfield, serving as president, thanked all donors for their continued support. In an unusual move, a board member was announced as the recipient of the Volunteer of the Year award. Robert Tardiff of Caribou, co-chair of the Agency Relations and Fund Distributions Committee along with Freeman Corey, was lauded for the ‘above and beyond’ contributions in tireless efforts.

A familiar face to Aroostook County residents has announced her candidacy for the Maine State Senate.
Pets END_OF_DOCUMENT_TOKEN_TO_BE_REPLACED

A big shout out to Carter Cyr of Sinclair. This kind and compassionate 12-year-old boy started his own business in the Long Lake area and donated a portion of his proceeds to the shelter.
What's Happening This Week END_OF_DOCUMENT_TOKEN_TO_BE_REPLACED