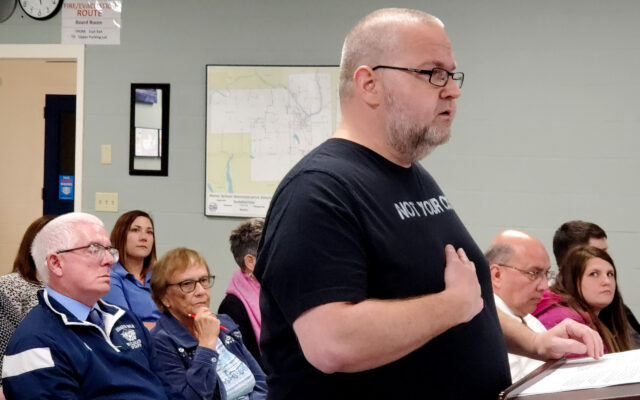 School board allows registered sex offender to speak at meeting

Paula Brewer • May 20, 2022
A man listed on sex offender registries in two states including Maine spoke to the SAD 1 school board.

PRESQUE ISLE, Maine — A man listed on sex offender registries in two states including Maine told the SAD 1 school board that the gender identity movement is dangerous.

Though not invited by the board, David Arthur Kendall of Hancock requested and was allowed to speak in the public comment period of the board’s meeting on Tuesday in Presque Isle for the standard allotted time of three minutes.

Kendall said the LBGTQ agenda is dangerous because it can force sexual identity on children and lead to gender confusion.

Kendall described himself as being a transgender woman for years, and said he was seduced into the LGBTQ movement. He identifies as a gay man and said he is glad he wasn’t placed on puberty blockers that would have affected his growth and development. He alluded to past behaviors and said he has since reformed his life.

“Please let these children know it’s OK to be gay,” Kendall said. “They don’t have to run into the arms of a rainbow movement that is bound to destroy them, body and soul.”

Following Kendall’s statements, Zippel Elementary School fourth-grade teacher Nancy Watson said she wished she could give her three-minute time allotment to Kendall. She said the LGBTQ movement can lead to the hypersexualization of children.

Watson read comments from a teacher in RSU 22 of Hampden who wrote that some kids are afraid of LGBTQ ideas being pushed on them and there is constant pressure for kids to label themselves.

In keeping with its public comment policy, the board listened but did not discuss the statements. The audience of about 15 people remained silent.

SAD 1 Superintendent Ben Greenlaw said Wednesday that the school board did not invite Kendall, but he was allowed to speak at his own request. The Presque Isle Police Department was told that he planned to speak.

SAD 1 staff were made aware of Kendall’s background prior to the meeting, Greenlaw said.

“We consulted with the district attorney’s office prior to allowing him to speak.  We were informed that Mr. Kendall could legally attend and speak at the board meeting,” Greenlaw said.

The meeting took place in the SAD 1 School Board conference room at Presque Isle High School. It was a meeting for adults, with no children present, and took place outside regular school hours, he said.

Kendall appears on Maine’s Sex Offender Registry as a lifetime registrant for sex offense against a child (fondling) on an out-of-state sentence.

He was convicted in 1998 in Orange County, Florida, for lewdly fondling or assaulting, committing or simulating sexual acts on or in presence of a child under 16 in a lewd, lascivious or indecent manner, according to the Florida Department of Law Enforcement Sexual Offenders and Predators listing. He served 22 days in jail at that time.

He spoke because he is concerned about the sexualization being inflicted on children, Kendall said Thursday. No one paid for or sponsored him to speak at the meeting and he has no specific connection to the area other than some previous visits, he said.

“I had always appreciated the atmosphere in PI and the people at other events/churches I had spoken at. There is a strong sense of morality and genuine compassion there that I don’t get to see a lot,” he said.

Watson said Thursday she spoke because she loves SAD 1 and its students and wants to protect the students from too much sexual curriculum that should be addressed at home and not at school.

“I do not want that for our students and I asked them to please look at our curriculum to make sure that that’s not part of it,” she said.

Next year's Caribou City Council will include a new member and a longtime councilor thanks to Tuesday's election.
Pets END_OF_DOCUMENT_TOKEN_TO_BE_REPLACED

When I wrote the first story of our dog Odie, I didn’t know that I would write a Part 2, but there were so many more stories that I decided more of this little dog’s story needed to be told.
What's Happening This Week END_OF_DOCUMENT_TOKEN_TO_BE_REPLACED