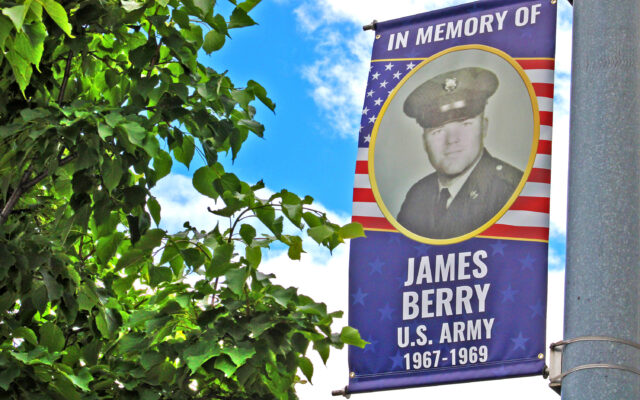 The banners were placed just before Memorial Day, and are phase one of a program undertaken by the Downtown Revitalization Committee.

Public response to the program was so great that the group, and its subcommittee for veterans projects, plans a second wave of the tributes in time for Veterans Day.

Revitalization committee Chairwoman Christy Daggett said Friday that requests are coming in for the banners, which can either honor a living veteran or be in memory of one who has died. What’s more, scholarships can help people afford the tributes,she said.

“We didn’t want anyone not to be able to afford it.  We didn’t want to discourage anyone from showcasing the veteran in their family,” she said. 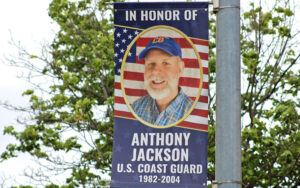 A 2021 memorial to veterans on Park Street’s Gold Star Bridge helped inspire the new project. Daggett said last year she was driving across that bridge when one of her children asked how it got its name. She formed a plan to raise banners with the names of Presque Isle’s Gold Star veterans — those who died serving the country.

Daggett said after the Gold Star Bridge tribute, committee members were energized. People who have moved to Presque Isle from places like Texas and Virginia spoke of similar banners in their hometowns, and the group wanted to bring the same idea to Presque Isle.

The Downtown Revitalization Committee has a subcommittee dedicated to veterans projects like this one, Daggett said. Members are: Deb Roark, director of university advancement and external affairs at the University of Maine at Presque Isle; John Herweh, vice president of human resources at MMG Insurance; Rod Cameron of the local Disabled American Veterans chapter; and Galen Weibley, Presque Isle’s director of economic and community development.

Daggett credits those four with carrying out the entire project.

“They were a dream committee.  They were very self-motivated.  They carried it all off and did a wonderful job,” she said.

Any veteran from an SAD 1 community is eligible. Either veterans or their families may apply for a banner. The cost is $100 each, but Daggett said people shouldn’t let the cost prevent them from applying thanks to contributions from the Presque Isle City Council and local businesses.

For information about the program or to obtain an application, contact Weibley at 207-760-2727, by email at gweibley@presqueisleme.us, or visit downtownpi.square.site/.

Daggett has her own personal connection to the project. Her grandfather, Dana Roix, a World War II veteran, is featured on one of the banners.

“He was really the touchstone in our family,” she said. “So to see him up there and know the whole city can see him, it’s an amazing reconnection to him. It makes me feel the legacy lives on.”

Next year's Caribou City Council will include a new member and a longtime councilor thanks to Tuesday's election.
Pets END_OF_DOCUMENT_TOKEN_TO_BE_REPLACED

Happy fall to you all.  It has been a super beautiful one so far. The harvest has gone well and the temperatures have remained warm, so enjoy these rare days because before long we will be into the winter months, and we all know what that means.
What's Happening This Week END_OF_DOCUMENT_TOKEN_TO_BE_REPLACED