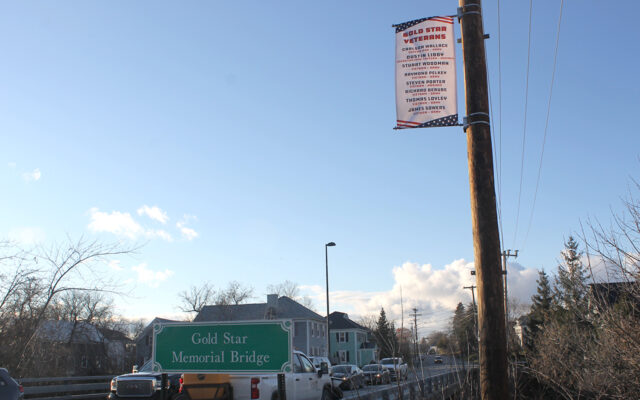 David DiMinno • December 1, 2021
When Laura (Porter) Cyr was 15 years old, she couldn’t bear to see her brother Steve leave his home in Houlton to join the Marines and fight in Vietnam.

PRESQUE ISLE, Maine — When Laura (Porter) Cyr was 15 years old, she couldn’t bear to see her brother Steve leave his home in Houlton to join the Marines and fight in Vietnam.

“In the early days following his death, we were surrounded by such an overflow of support and  love from such a caring community of friends and family,” Cyr said.

Now, even though it’s been 53 years since his death, Cyr and her brother Tom are touched by a new effort on Presque Isle’s Gold Star Memorial Bridge to keep their late brother’s memory alive.

Christy Daggett, chairwoman of Presque Isle’s Downtown Beautification Committee, was driving across the bridge when one of her children asked how it got its name, and the idea of raising a memorial to local service members was born.

Growing up, Steve Porter was well liked. He and his family would often go camping and to the movies with close friends. He grew up playing sports like Little League baseball, basketball and boxing. In his teenage years, he was an umpire for Little League in Houlton.

Laura Cyr fondly remembers riding in the back of Porter’s 1955 Chevy, while he drove his girlfriend around. She said he never made her feel like a third wheel.

Porter had his fair share of scraps, which led to some long conversations with his parents. He practiced compassion, but was no pushover, Cyr said.

In November 1968, Porter shipped out for basic training at the Marine Corps Training Depot in San Diego, California, at the age of 18. He enlisted on the buddy system with his close friend Doug McNutt. The two eventually became separated when Porter was sidelined with a stomach illness.

He returned to Maine in April 1969 after basic training, and began his tour as a private first class on May 23, 1969, in Vietnam. He was killed just over six weeks later.

When news of Porter’s death came to his family, who had since moved to Presque Isle, the Houlton and Presque Isle communities became pillars that the Porters could lean on.

“I will never forget hearing that his funeral procession to the cemetery was the longest seen in recent years,” Cyr said.

Porter’s friends took his younger brother Tom on a trip to Mt. Katahdin, a way of filling in for Steve. Houlton named the Steven Porter Little League field in his honor. 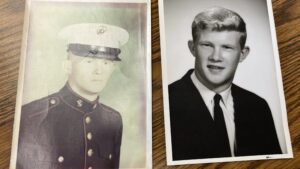 Marine Veteran Steven Porter’s family moved from Houlton to Presque Isle while he was deployed in Vietnam. (Courtesy of Laura Cyr and Tom Porter)

Christy Daggett has her own connection to a veteran. Her mother graduated from Ashland High School in 1970, and the yearbook that year was dedicated to her mother’s classmate and friend Bobby Goding, who had died in Vietnam. Daggett remembers looking through that yearbook.

“This left a big impression on me, even as a little girl,” Daggett said. “Every time we talk about patriotism and our country’s image abroad, there is a huge sacrifice, and my mother also felt that very keenly.”

After Daggett and her family drove across the Gold Star Memorial Bridge early this November, she thought of a way to honor those from Presque Isle who gave their lives to protect the freedoms of the citizens of the United States.

Daggett recorded the names of all Gold Star veterans to put on a series of banners to hang on the Gold Star Bridge. Then, Peter Lajoie, president of Lajoie Electric and Control Service, put up the banners on the bridge, free of charge.

“It was just my way of giving back to the veterans,” Lajoie said. They have done so much for our country, and I am in a position to do my part to recognize them.

Sen. Trey Stewart also helped by working with the Maine Department of Transportation, and making sure that the banners could go up undisturbed. Finally, Dana Fowler and Presque Isle Public Works put the finishing touches on the project by making sure the surrounding grass around the bridge was cut.

Both Cyr and brother Tom Porter were grateful to see the banners with their brother’s name alongside the others.

For the first time since 2019, there is competition for open seats on the Houlton Town Council
Pets END_OF_DOCUMENT_TOKEN_TO_BE_REPLACED

We hope everyone enjoyed a wonderful holiday season and is looking forward to the new year.  December was a busy month at the Central Aroostook Humane Society with so many people and businesses bringing in much-needed supplies and monetary donations, which help us to take care of the special temporary pets in our care.
What's Happening This Week END_OF_DOCUMENT_TOKEN_TO_BE_REPLACED