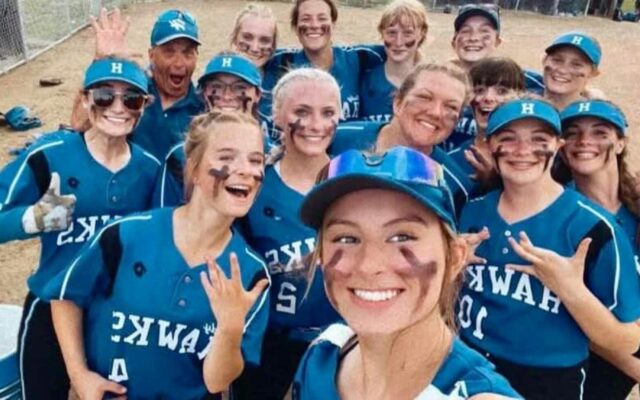 Joseph Cyr • June 14, 2022
Only one local squad was able to punch its ticket for the right to compete in a regional championship.

HOULTON, Maine — It has been a busy week for high school baseball and softball teams as several local squads competed in quarterfinals and semifinals contests.

But when the dust settled, only one local squad was able to punch its ticket for the right to compete in a regional championship.

The Hodgdon softball team advanced to the Class D North championship game following Saturday’s exciting 3-2 victory over No. 2 Woodland. It marks the first time since 2004 that Hodgdon has made it to the regional championship.

Machias advanced to the title game with a 7-1 victory over No. 5 Penobscot Valley on Saturday.

In Saturday’s semifinal for Hodgdon, Marissa Dow allowed two runs on five hits inside the pitching circle for the Hawks. Aleyah Matheson led the team offensively with a triple and two singles with a run. Sadie Thompson added a triple and single with two runs scored. Sydney Harvey had three singles.

Knotted at 2-2 going into the seventh inning, Hodgdon scored what turned out to be the game-winning run in the top of the inning. Thompson led off the seventh with a triple and scored on a fielder’s choice by Matheson.

Woodland threatened in the bottom of the seventh, putting runners on second and third. Hodgdon third baseman Kaelyn Lawlor caught a line drive to end the game.

Just one day earlier, Woodland and No. 7 Katahdin battled through 10 innings before the Dragons pulled off a 7-6 victory. The Cougars led 6-2 going into the bottom of the seventh inning before Woodland rallied to even the game at 6-6.

Neither squad was able to plate a runner until the 10th inning. By rule that inning starts with a runner at second base to facilitate a team scoring a run. The Cougars managed to advance the runner to third in the top of the 10th, but were unable to score.

In the bottom of the 10th, Woodland managed to plate its runner, ending the game. Katahdin ended its season with a 11-5 overall record.

The playoff road came to an end for the Houlton baseball squad Saturday as the No. 5 Shires were eliminated by No. 1 Bucksport, 7-1. Just one day earlier, Houlton knocked off No. 4 Orono 10-8 in the quarterfinals.

In Saturday’s semifinal contest at Bucksport, the Shires struck first, scoring their only run in the top of the first inning. Silas Graham walked and scored on a double by Nolan Hodgkins, who also had a single in the game. Colin Moody added a double for the Shires, who mustered just three hits on the day.

Ty Giberson went the distance for Bucksport, allowing one run on three hits and three walks, with a whopping 15 strikeouts.

“To make it to the semifinals after not having a team for two years speaks volumes to their work ethic and character,” Houlton coach Jim Castner said.

One day earlier, the Shires traveled to Orono to take on the Red Riots. A four-run first inning set the tone for Houlton, but Orono kept the game close throughout. The Shires led 8-3 after four innings, and 10-5 after five innings. The Red Riots plated three runs in the bottom of the seventh, but the rally was cut short, giving Houlton the 10-8 victory.

Recently we took in a cat named Joe. He is a very sweet cat with a multitude of problems. He was rescued from the streets here in town, but Joe turned out to be a very sick kitty and was surrendered to The Ark because the resources were not there to help him.
What's Happening This Week END_OF_DOCUMENT_TOKEN_TO_BE_REPLACED