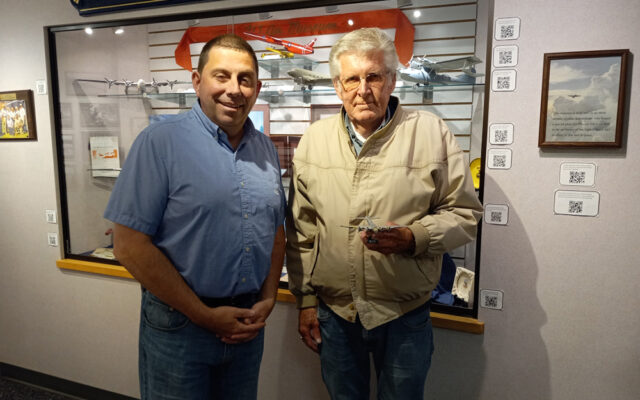 Contributed • June 16, 2022
The Presque Isle Air Museum recently accepted the donation of a small, but impactful gift.   Presque Isle resident Ralph Wilcox donated a die-cast model of a B-17 “Flying Fortress” to the museum during its regular bi-monthly board meeting.

Presque Isle resident Ralph Wilcox donated a die-cast model of a B-17 “Flying Fortress” to the museum during its regular bi-monthly board meeting.

The B-17 four-engine bomber was an important strategic weapon for the United States during World War II.  It was developed by Boeing in the 1930s for the U.S. Army Air Corps and used primarily for bombing German targets during the war.

In fact, the B-17 dropped more bombs than any other aircraft employed by the United States during WWII.  It was fast and high-flying with long-range capability, making it extremely important to the U.S. arsenal.

Craig Green, board president of the Presque Isle Air Museum, said, “Although the museum has several model aircraft on exhibit in its large display case, it did not previously have one of the B-17.  This donation is significant due to the importance of the B-17 to the war effort as well as that of the importance of the Presque Isle Army Air Base to the defense of the nation during WWII and the Cold War.”

Presque Isle Army Air Base, established in 1941, became the Presque Isle Air Force Base in 1947.  More combat planes, including the B-17, left this base for Europe than any other base in the U.S.  Presque Isle was the major departure point for aircraft and equipment headed overseas at that time.

The nonprofit museum was established in 1999 to honor those who served during World War II and the Cold War at Presque Isle’s air base; and to preserve, chronicle and promote awareness of Presque Isle’s aviation history.

For more information on the museum, visit its website at https://piairmuseum.wixsite.com/mysite, email piairbasemuseum@hotmail.com, or call 207.554.2343.

June is generally a month that also marks the height of “kitten season,” when large litters of kittens are born and often end up in animal shelters.   Luckily, here at the Central Aroostook Humane Society, we have seen a dramatic drop in the cat population over the past five years, mostly due to our spay and neuter program.
What's Happening This Week END_OF_DOCUMENT_TOKEN_TO_BE_REPLACED