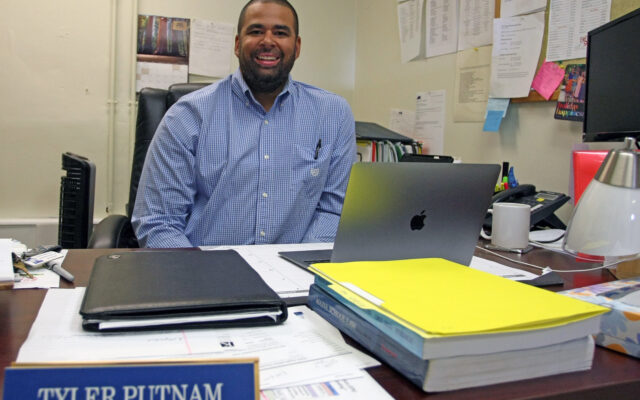 Putnam relishes opportunity to return to his alma mater

Joseph Cyr • July 11, 2022
After spending a year away from the district, Tyler Putnam’s dream of serving as the superintendent and high school principal for SAD 70 is a reality.

HODGDON, Maine — After spending a year away from the district, Tyler Putnam’s dream of serving as the superintendent and high school principal for SAD 70 is a reality.

In his first week back in SAD 70, Putnam said he is eager to take on new challenges and responsibilities for the school district he grew up in and came to love.

“It is overwhelming,” Putnam said. “The support I have received from the community has been outstanding. Everything has been very positive, which is great to see because sometimes in these positions you have to make some tough decisions.”

Putnam served as the assistant principal at Hodgdon Middle-High School for two years (2019-20/2020-21 school years). Prior to Hodgdon, he was a teacher in the Washburn and Acton school departments, and has more than 16 years experience in the field of education.

Making the transition from Hodgdon, with a high school enrollment of about 300 students to a system with 1,460 in Lewiston, was a major adjustment. But he does not regret his decision to leave SAD 70 at that time.

“I felt like I was ready to run my own building as a principal and the position in Lewiston came along,” he said. “I was very excited for the opportunity.”

But all that changed when Putnam had a phone conversation back in February with Fitzpatrick, who informed him of his plans to retire.

“I have always enjoyed this community and dreamed of one day being in this position,” Putnam said. “I didn’t think it was going to be available for a few years and I didn’t really want to leave (SAD 70).”

A 2002 graduate of Hodgdon, Putnam was a standout athlete for the Hawks. During his time as the assistant principal, he could be found at most every sporting event held at the school, cheering on his former team.

One of his primary goals for the district will be staff retention.

“Anytime you are in a small district, you have a lot of things facing you on a regular basis,” Putnam said. “For me, retaining those teachers who have proven themselves is my No. 1 priority.”

Going from one of the smaller school districts in the state to one of Maine’s largest was no easy leap. But Putnam said he is fortunate to have that experience as it gave him a better understanding of how to run a school district.

“Everything that a school does well, or struggles with, is magnified in a larger school district,” Putnam said. “There was a constant need to address issues. But without that experience I don’t think I would be as ready as I am for this new opportunity.”

Upon completion of his doctorate this summer, Putnam must spend one year with a mentor superintendent. RSU 29 Superintendent Richard Lyons has agreed to fill that role for Putnam.

He added that he also has the luxury of having two key administrators to work with — Mill Pond Elementary School Principal Matt Oliver and Hodgdon Middle-High School Assistant Principal Lacey McQuarrie, as well as business manager Susan Hawkes.

Forbidden foods for our four-legged friends are many and can be very dangerous if ingested. Sometimes, we give our pets leftovers or what we consider treats. According to many sources, some human foods can make an animal very sick, and in certain cases can even be lethal.
What's Happening This Week END_OF_DOCUMENT_TOKEN_TO_BE_REPLACED