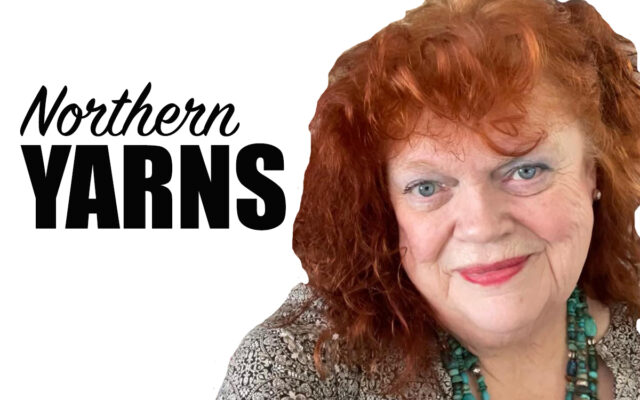 A piece of sky

Belinda Hersey, Special to The County • August 3, 2022
As promised so many weeks ago, here is the second part to my most recent Northern Yarn regarding my fascination with old buildings.  I have spoken before of my career and of the honor of working with those who were visually impaired or blind. Each precious encounter I experienced in itself was a life lesson, and from time to time I am inspired to share some of these “yarns” with you.

As promised so many weeks ago, here is the second part to my most recent Northern Yarn regarding my fascination with old buildings.

I have spoken before of my career and of the honor of working with those who were visually impaired or blind. Each precious encounter I experienced in itself was a life lesson, and from time to time I am inspired to share some of these “yarns” with you.

Some years ago, I worked with a gentleman in Caribou who was visually challenged and lived alone in the home he and his wife purchased when they first married.

There was a garage attached to his house that he used daily. In addition to his car, there were a lawnmower, snowblower and small garden tractor inside. We had spoken many times in the past in regard to him continuing to drive and each time, he graciously dismissed my concerns. There was another building on his property, just beyond his house and quite visible. The building, a tired, paint-chipped brown, had certainly seen its better days. The two front swinging doors were held together with a rusty chain and padlock. On the top of this one-story structure, a modern skylight had been installed on the left side of the roof, very close to the peak. I always wondered just what the building contained and in the course of my last visit with him, he asked me if I would like to see what “lurked” behind that locked front door. Of course, I said yes.

We walked slowly through the long grass, following what I could see was a path from his house to the chained doors. He reached into his pocket and pulled out a single key on a keychain with his wife’s name, Isabella, and with shaky hands, unlocked the door. He looked at me quickly before pulling the doors open.

“Are you ready for this?” His beautiful, faded hazel eyes danced with merriment.

And with that, the doors opened up, revealing a world before me I will remember always. The skylight above reached out with scattered, soft beams of light that magically blanketed each corner of the tiny shed with an encompassing and subtle glow. A myriad of mesmerizing colors reached out to me. Each brilliant painting, encased in plain picture frames, stood out proudly and distinctly. Upon closer inspection, I realized that each painting before me was in actuality a jigsaw puzzle, no doubt assembled by Isabella. I turned around and around, not knowing just which one to focus on.

I know I kept repeating the same words over and over to him, “So beautiful. So much work! Thank you for sharing. Thank you.”

There were Monets, DaVincis, Pollocks, Warhols and Wyeths, just to name a few. There were also photos of gardens, animals, gazebos; the list goes on and on.

“And not a piece out of place,” I declared.

He cleared his throat and turned to the wall on his right.

“Well,” he said. “We somehow lost just one piece out of this one here.” He pointed to “Starry Night” by Van Gogh. “We turned the place upside down and we never found it.”

I looked more closely at the puzzle and noticed a piece of the night sky was in actuality a dab of paint — that same rich blue.

“Well, no one will ever notice,” I said. He smiled and led me out of the building. “What about at night?” I asked. “There is no electricity.”

“I never come here at night, my dear. Only during the daylight. And I only come out during warm weather. Sometimes, during the winter, a puzzle or two will shed a few pieces and in the spring I make everything whole again – except for that one missing piece.”

I did not see the dear gentleman again, though I would drive by his home and check to make sure the building was still there. Eventually, the little shed was swallowed up by new owners, and all that remained was a square patch of dirt where it had once stood – harboring a treasure.

I have often wondered about that one missing piece of puzzle from “Starry Night” and its whereabouts. I envision someone standing where the building existed for so many years. I see them scuffing their feet into that square of dirt and finding all that remains of a small piece of sky, rising up out of the ground, still that vibrant blue after all of these years.

Belinda Hersey lives in Caribou with her husband, Kent, and their two dogs, Barney and Morgan.  You may email her at belindaouellette9@gmail.com.

Most of us have had just about enough of hearing about COVID-19 and the different variants that are popping up, but unfortunately, this pesky virus is still around.  It’s important to know a few warning signs and tips if you think you or your furry family members are affected with this illness.
What's Happening This Week END_OF_DOCUMENT_TOKEN_TO_BE_REPLACED