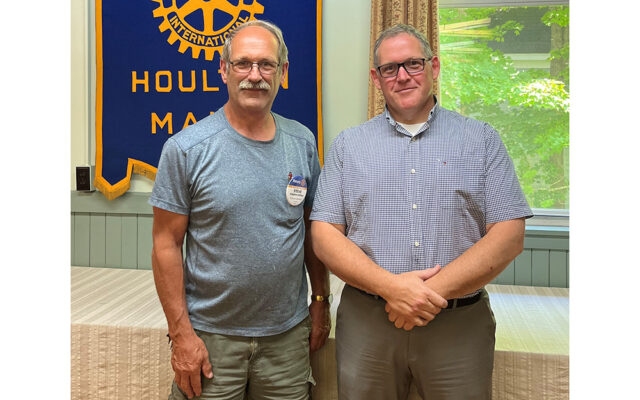 Rotary Gets an update from Sheriff Gillen

Contributed • August 5, 2022
More than 25 Rotarians attended the weekly meeting on Monday, Aug. 1, either in-person or via Zoom.

HOULTON, Maine – More than 25 Rotarians attended the weekly meeting on Monday, Aug. 1, either in-person or via Zoom.

Rotarian Steve Bither introduced his guest, Aroostook County Sheriff Shawn D. Gillen.  Gillen started his career with the Sheriff’s Office in 1995 as an officer in the jail. He also worked as a transport deputy and patrol deputy before being assigned to the state drug enforcement unit in 2001. He remained with that unit for 12 years. In 2015, he was appointed as chief deputy sheriff and was elected as sheriff in November of 2018. His current term expires in December and he will be running for another term.

During his update to members of the Houlton Rotary Club, the Sheriff indicated the outlook was not a bright one.  “Things seem to be getting worse.”, Gillen stated.  “The department is doing more training, but the level of violence is up.”  He said the increased levels correlate with the increased drug issues and mental-health related issues.

Sheriff Gillen also mentioned the need for a new county jail facility, which he is actively seeking to have built. The current location has 117 beds, but is usually filled to over capacity at 130-132.  If a new jail facility is approved, it could still take more than five years following the approval to come to fruition.

He indicated approximately 10 percent of the population should not necessarily be housed at the jail due to mental-health related issues but there is no other place for them at that moment.  If a new facility is approved, it would look to have a wing for those with substance abuse problems and a wing for those with mental-health related issues to possibly provide appropriate solutions and treatment.

Overall, Gillen indicated a huge strain on resources, including the facilities themselves, and human resources, throughout Aroostook County.  The increased strain on the human resources is a result of fewer individuals entering the law enforcement field and some local police departments closing.  He indicated they are fully staffed at the moment with 16 law enforcement officers, but are down at least three people in the Aroostook County Jail.

“The population may be going down in the County, but the population in the jail is still going up”, he says.  His office is in on-going efforts to look to fill these positions and to continue the training of all law enforcement.

When asked if Rotary could do something to assist with any of the issues the Sheriff’s department is facing, Gillen said to just provide support in any way possible.

Most of us have had just about enough of hearing about COVID-19 and the different variants that are popping up, but unfortunately, this pesky virus is still around.  It’s important to know a few warning signs and tips if you think you or your furry family members are affected with this illness.
What's Happening This Week END_OF_DOCUMENT_TOKEN_TO_BE_REPLACED