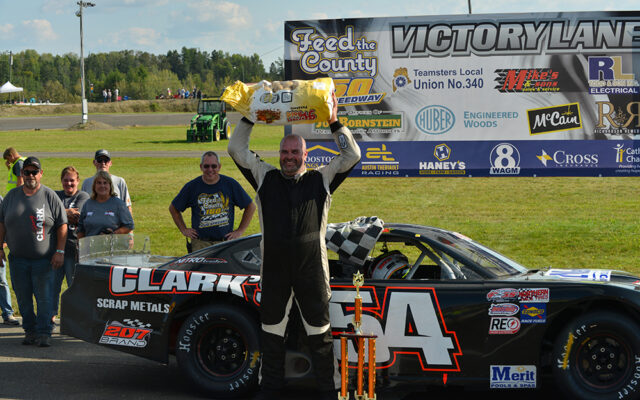 Amy Worrey, Chasing the Checkered • September 13, 2022
Following a three-year hiatus, the Feed the County 150 returned to Spud Speedway on Sunday, Sept. 11. The annual Pro All Star Series race is the track’s sole event of the season.

CARIBOU, Maine – Following a three-year hiatus, the Feed the County 150 returned to Spud Speedway on Sunday, Sept. 11. The annual Pro All Star Series race is the track’s sole event of the season.

The event is not only $4,000 to win but it also serves as a fundraiser for Catholic Charities of Maine, who provides support for multiple Aroostook County food banks.

Coming into the event, Ryan Kuhn held a comfortable 15-point lead over Eddie MacDonald for the PASS Super Late Model championship, but it was Joe Pastore and Johnny Clark who led the way in the qualifying heat races. Both drivers were on the rebound after tough finishes in last month’s Oxford 250.

Before the main Super Late Model event, the PASS Modifieds took to the track for their 50-lap feature race. Troy Morse took off from the beginning and led the first 40 laps of the race before falling victim to a flat right front tire while under caution. His nephew Spencer Morse, who raised a considerable amount of money and collected donations for Feed the County, came out of semi-retirement for the race, but was involved in the caution on lap 40 and never returned to the track. 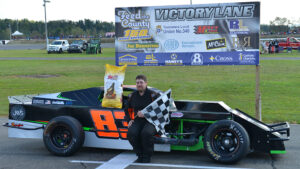 Dan Brown came out on top following a three-way battle for the top spot on the restart. He led the charge from there on out, picking up his second victory of the 2022 season. Brandon Varney and point leader Garrett Lamb rounded out the podium.

Pastore led the early charge in the 150-lap main event, but was overtaken by Ben Rowe on lap 50. Point leader Ryan Kuhn faced trouble on lap 57 as he cut a tire down, resulting in a caution. Clark, who was consistently making his way toward the front, took over following the restart and began distancing himself from the competition.

Track favorite Wyatt Alexander, the Speedway 660 point leader who was making his first start at a Maine race track in 2022, came to a slow on lap 75 and never returned to the track.

The second half of the race was the Clark show. He continued to pace the field and distance himself from DJ Shaw in the closing laps of the race, putting early heavy hitters Rowe and Pastore both a lap down before the conclusion of the race.

Clark sealed the deal on his redemption story after suffering a heartbreaking loss in last month’s Oxford 250. Clark, who made the last-minute decision to compete in the race just four days prior, breathed a sigh of relief in Victory Lane with his team by his side.

“All we can do is move on and go win the next one and that’s just what we did.”, he exclaimed in his post-race interview with track announcer, Nick Huff.

The event concluded with a Street Stock Invitational, which was won by Speedway 95 regular Kris Watson, and the Maine Enduro Tour.

The Feed the County 150 was an overall success, serving as redemption for one of Maine’s racing greats and more importantly, raised thousands of dollars for Aroostook County’s food banks. The event is already in talks for 2023 and is sure to be better than ever before with the supportive fans from Maine, Canada and beyond.

Gubernatorial candidate John Glowa said that he wants to spur government reform that truly creates a system of, by and for the people when he visited Presque Isle City Hall.
Pets END_OF_DOCUMENT_TOKEN_TO_BE_REPLACED

Many of you have been asking about our super popular “Toast to the Animals” celebration. After several COVID-19 cancellations and not being able to host this great fundraiser, we are finally ready to celebrate the animals once again and help support the Central Aroostook Humane Society.
What's Happening This Week END_OF_DOCUMENT_TOKEN_TO_BE_REPLACED