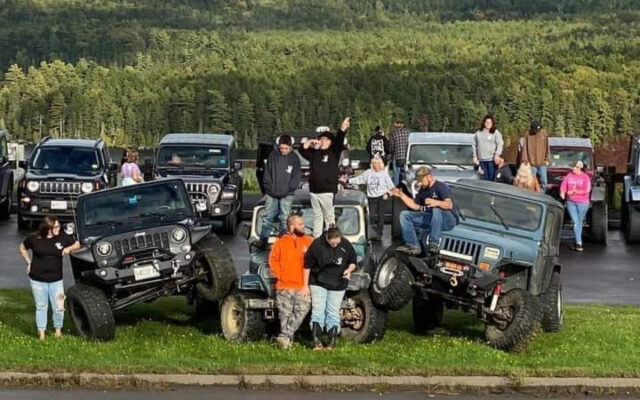 Joseph Cyr • September 22, 2022
Given time, cancer affects practically every person in one way or another.

HOULTON, Maine — Given time, cancer affects practically every person in one way or another.

Perhaps it is a close family member or friend who received a diagnosis during a routine checkup. Or maybe it was a former classmate from high school or college, who you hadn’t seen for many years, who posted their condition on a social media platform.

Those who receive such a diagnosis face a myriad of emotions often referred to as a roller coaster of highs and lows.

The Pink Ribbon Ride for Hope returns for its second outing Sunday, Oct. 9. The approximately 80-mile ride is open to anyone with a four-wheel-drive vehicle, but the majority of participants are Jeep owners.

Created by Toni Hetherington of Houlton, the first ride blew away expectations, both in terms of how much money it raised and how many people participated. A registered nurse at Houlton Regional Hospital’s obstetrics department, Hetherington attributes the growing interest to the many people who volunteered to make it happen.

“I could not do any of this without the incredible support from others who have volunteered their time, or donated items for us to raffle,” Hetherington said. “This is not a one-person show. It has really taken off and people have seemed to relate to it.”

Hetherington is one of those survivors who has benefited from the walk in years past and feels motivated to help raise money for others. She was diagnosed with breast cancer in 2015, and following a mastectomy and eight months of chemotherapy, her treatment was deemed a success. 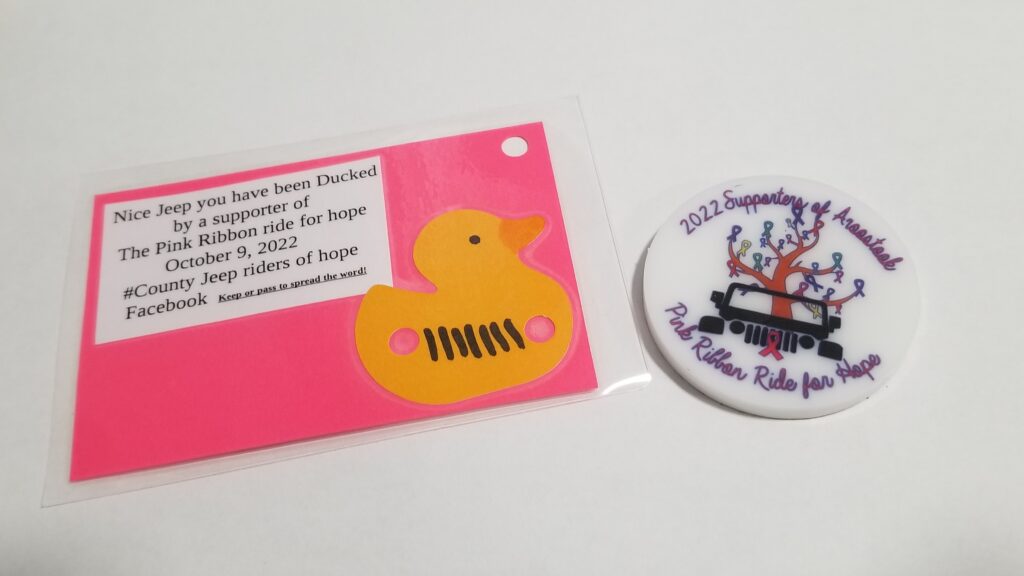 HOULTON, Maine — September 21, 2022 — These tokens are being sold as part of the fundraiser for the 2nd annual Pink Ribbon Ride, slated for Sunday, Oct. 9 in Houlton. (Joseph Cyr | Houlton Pioneer Times)

Her reasons for organizing the ride are simple.

“I do it because I love this area and the Bridge to Hope holds a special spot for me as an organization,” Hetherington said. “As I am a breast cancer survivor myself and have lost many friends and family members to the disease, I love that the funds stay local and appreciate all the Bridge does to help those in treatments in our community.”

The ride serves as a fundraiser for the Bridge To Hope cancer group, which assists individual people and families with financial and emotional support during treatments. Each year, that group holds a walk in October to raise money toward its mission of providing assistance to those in Aroostook County.

This year’s walk is slated for 10 a.m. Saturday, Oct. 15, in Houlton’s Riverfront Park.

In 2021, the Jeep group held its inaugural ride, featuring 30 Jeep owners driving from Houlton through the back roads of southern Aroostook County to Haynesville and back again.

“Last year we filled our Jeep seats for Bridge to Hope’s fundraiser and we are looking forward to another great convoy ride this year to help raise donations and awareness for the cause,” Hetherington said.

The inaugural ride raised $1,700 to donate to Bridge to Hope following the 2021 ride. This year, she wants to double that amount with a goal of raising $3,500. To achieve that, they are selling specially made tokens that are being sold for a suggested donation of $25. A total of 100 tokens have been created for the event.

The ride will explore some of The County’s more scenic views, including those on Westford Hill in Hodgdon, including a stop at Wynes’ Trailside Popcorn, as well as Big Rock in Mars Hill, including a visit to the Rusty Crab.

Gubernatorial candidate John Glowa said that he wants to spur government reform that truly creates a system of, by and for the people when he visited Presque Isle City Hall.
Pets END_OF_DOCUMENT_TOKEN_TO_BE_REPLACED

This past week on the Central Aroostook Humane Society’s Facebook page, we asked everyone to show us some loved rescued pets. We said, “Share a picture and make our day.”
What's Happening This Week END_OF_DOCUMENT_TOKEN_TO_BE_REPLACED