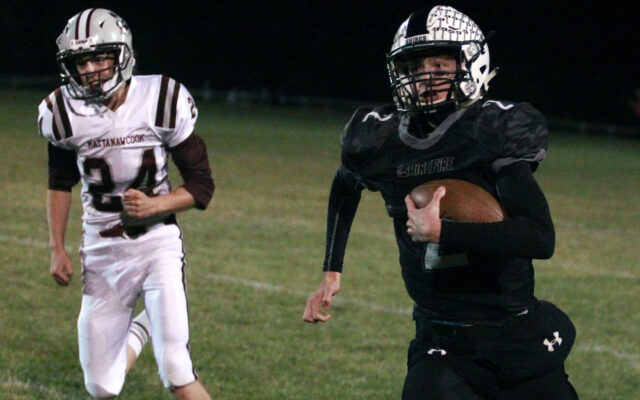 The No. 6 Shires fell to No. 4 Mattanawcook Academy in Lincoln, 58-56, in overtime in an 8-Man Small School division quarterfinal game.

“I am extremely proud of our team,” Houlton coach Jon Solomon. “They played their hearts out tonight. Despite our record we fought hard and improved in every game as the season went along. We will have six returning starters on offense and defense. The future is bright for this program.”Houlton amassed 532 yards of total offense, compared to 468 yards for Mattanawcook. Shire quarterback Isaiah Ervin was a perfect 10-for-10 in passing for 282 yards and three touchdowns. Ervin also carried the ball 22 times for 164 yards and four rushing touchdowns.

Houlton had rallied from a 30-14 deficit at one point in the third quarter and actually took a 44-36 lead with 1:13 to play in regulation, but MA managed to tie the game, 44-44, on its next possession, scoring with 36 seconds remaining.

The Shires nearly pulled off a miraculous victory when the team faked a punt with just a few seconds left on the clock in regulation. Rather than punting the ball away, Ervin kept the ball and managed to advance it to midfield.

Ervin then tried to lateral the ball to Bronson Hanning, who took it the distance for what would have been the game-winning score. The officials however ruled that Ervin had fumbled the ball forward, which meant the ball could not be advanced, ending regulation with the two squads knotted at 44-44.

In overtime, both teams are given an opportunity to score from the 10-yard line until a winner is declared. Both squads were successful on their first attempts, but the Shires were unable to punch in the two-point conversion on their second attempt, resulting in the two-point loss.

Mattanawcook Academy’s Isaac Hainer was a one-man wrecking crew as he carried the ball 37 times for 383 yards and seven touchdowns.

Next year's Caribou City Council will include a new member and a longtime councilor thanks to Tuesday's election.
Pets END_OF_DOCUMENT_TOKEN_TO_BE_REPLACED

Happy fall to you all.  It has been a super beautiful one so far. The harvest has gone well and the temperatures have remained warm, so enjoy these rare days because before long we will be into the winter months, and we all know what that means.
What's Happening This Week END_OF_DOCUMENT_TOKEN_TO_BE_REPLACED