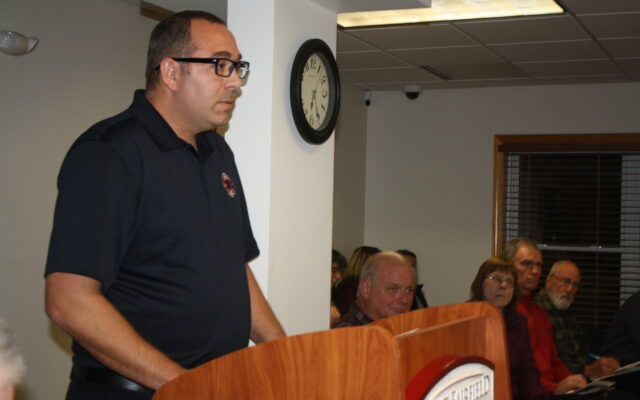 Melissa Lizotte • November 21, 2022
As Fort Fairfield looks to cut costs in its still new ambulance department, town officials have ensured that the service can remain for at least another year.

FORT FAIRFIELD, Maine — As Fort Fairfield looks to cut costs in its still new ambulance department, town officials have ensured that the service can remain for at least another year.

Fort Fairfield Fire & Rescue Chief Mike Jalbert said on Nov. 17 that he successfully renewed the town’s ambulance license, which was set to expire on Nov. 30.

The move will allow Jalbert and Interim Town Manager Dan Foster to continue searching for ways to decrease costs at the department, which has a budget of $1.7 million, with $250,000 in debt service.

Jalbert previously said that he hopes to sell one of the department’s two new ambulances and other town-owned EMS vehicles, including one of two SUVs, a ladder fire truck and one of two pick-up trucks.

During the most recent council meeting, Jalbert said that he is still in negotiations with potential buyers but hopes the town could sell the vehicles at or close to current market value.

He also expressed relief at having the town’s ambulance license renewed.

“This will give us more time to look at other areas [of the department],” Jalbert said.

In another effort to save the department money, town councilors voted unanimously to make an exception to Fort Fairfield’s nepotism policy to allow Jalbert’s wife Peggy to work as an on-call paramedic.

Typically the town does not allow family members of current employees to be hired in any department or serve on the town council and committees. But Foster recommended the policy exception as a way to help the Fire & Rescue cut salary and benefits expenses that come from hiring full-time employees.

“For every dollar that you spend on a [full-time] employee, you’re spending 40 cents on benefits,” Foster said. “If we use more part-time and on-call people, we won’t have to only use full-time people.”

“If this were a full-time position, I would have concerns [about changing the policy] but because of the circumstances and with this only being on call, I’m asking you to approve this hire,” Foster said, while addressing the council.

Councilors did not express concerns prior to their unanimous vote.

The next regular town council meeting will occur at 6 p.m. Wednesday, Dec. 21, in the council chambers, 18 Community Center Drive.

Next year's Caribou City Council will include a new member and a longtime councilor thanks to Tuesday's election.
Pets END_OF_DOCUMENT_TOKEN_TO_BE_REPLACED

Everyone who enjoys the company of a dog knows that sometimes dogs have strange behaviors.  They may arrive in your life with the behaviors already in place, or perhaps they are adopted as a puppy and develop a behavior young.
What's Happening This Week END_OF_DOCUMENT_TOKEN_TO_BE_REPLACED