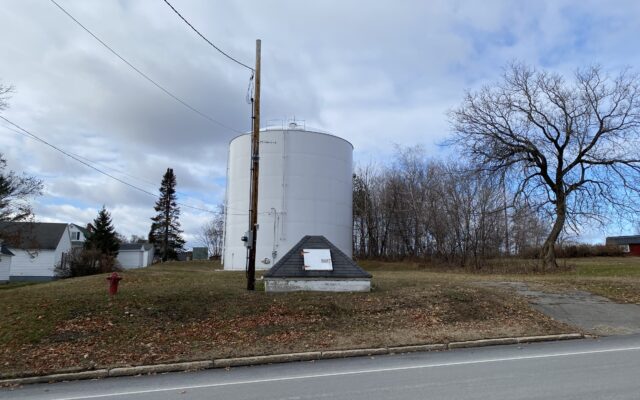 Caribou water pump stations to be upgraded thanks to bond funds

The Utilities District’s board of trustees have unanimously approved a $467,000 bond to relocate the water pump stations’ infrastructure above ground and replace the roof-like underground entrance with an above-ground building.

The pump stations are located on the northern and southern ends of Main Street next to the Utilities District’s low-service water tanks.

“Each dog house has two pumps. Once [a water tank’s] water pressure gets low enough, that tells the doghouses to turn on the pumps and fill the tanks,” Kirkpatrick said.

Both pump stations were built in the 1960s. When workers enter the “dog house” through a small entrance, they must go nearly eight feet underground to inspect and repair the infrastructure.

Once upgraded, the pump stations will be located above ground in a larger building. The changes will no longer require the Utilities District to track who works at the pump stations and when or create a checklist of equipment they used, per Maine Department of Labor guidelines.

“When the project is finished, it will look like a building, with its own door and siding, but will function the same way [as the current pump stations],” Kirkpatrick said. “It will be much easier and safer for our staff to access the equipment there.”

Though the 20-year Maine Municipal bond will cover the project’s estimated $467,000 total cost, the Utilities District could end up paying less due to Maine’s Drinking Water Revolving Fund.

The fund could provide at least 25 to 40 percent in principal loan forgiveness to help offset project costs, Kirkpatrick said.

“Whatever money [from the revolving fund] is available, the state will apply toward our project after it’s built,” Kirkpatrick said.

Created in 1973 by the Maine State Legislature, the Bond Bank provides bonds to town and city municipalities, water and sewer districts, schools and other government entities to fund capital projects.

The Utilities District has used the Bond Bank to fund multiple past projects, including the installation of a 12-inch water main from Water Street up to the low-service tank on North Main Street. During that project, the district received 25 percent principal forgiveness from the Drinking Water program that reduced costs from more than $600,000 to $400,000.

Although the District is locked into Bond Bank payments for 20 years, having a revolving fund for debt service prevents the district from raising customers’ water rates.

“When [other Utilities Districts] don’t have a system set up for debt service, all the money they take in from rates go toward operational expenses. That means rates rise when a project comes up,” Kirkpatrick said. “Every year we evaluate what our project priorities are so we can roll that debt service back into the system.”

Once the district goes out to bid on the pump station project, Kirkpatrick and trustees expect the work to be completed later in 2023.

Next year's Caribou City Council will include a new member and a longtime councilor thanks to Tuesday's election.
Pets END_OF_DOCUMENT_TOKEN_TO_BE_REPLACED

When I wrote the first story of our dog Odie, I didn’t know that I would write a Part 2, but there were so many more stories that I decided more of this little dog’s story needed to be told.
What's Happening This Week END_OF_DOCUMENT_TOKEN_TO_BE_REPLACED